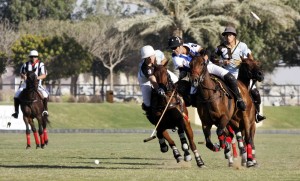 It was an afternoon of emotion and great actions at the Dubai Polo & Equestrian Club with two excellent matches. 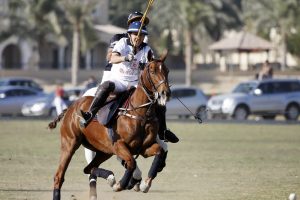 The first match of the day showed another huge performance by Bin Drai winning their ticket to the final.

The foursome made up by Adriano Agosti, Nicolás Petracchi, Tomás Iriarte and Juan José Brané quickly took control of the game and never let it go. With an excellent third chukker, obtaining a big difference of 4 goals, the job was done and the classification to the final on the way. The fourth chukker with a goal by Petracchi, the third one in his personal record, confirmed Bin Drai´s victory by 8 goals to 4.

The second match of the day showed one of the best games of the KBL Dubai Polo Gold Cup. The battle between the Habtoor brothers was won this time by Mohammed Al Habtoor with another fantastic team work. 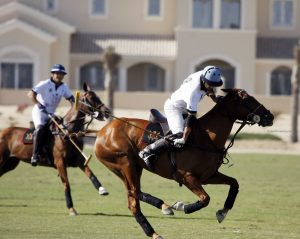 As seen against Bin Drai and Abu Dhabi, Habtoor Polo team played in a superb level against Mahra and sealed their ticket to the final.

It was one of the best matches of the tournament with a continous come and go. Two goals by Francisco Elizalde, the MVP of the match with a fantastic performance, and two from Guillermo Cuitiño gave the lead to Habtoor Polo by 4 goals to 2 in the first chukker.

Mahra started better the second period getting closer in the scoreboard with a goal by Agustín Canale but Habtoor quickly replied with new goals from Elizalde and Cuitiño. Habtoor Polo arrived at the half time with a 6-3 advantage.

Rashid Al Habtoor, with a great goal, put again presure on the final minutes of the game but again Cuitiño took Mohammed Al Habtoor´s team to the final by winning 9 goals to 7.

Tomorrow The KBL Dubai Polo Gold Cup will play the last qualyfing game between Zedan and Abu Dhabi. This match will be played at Desert Palms Polo Fields at 3 pm.