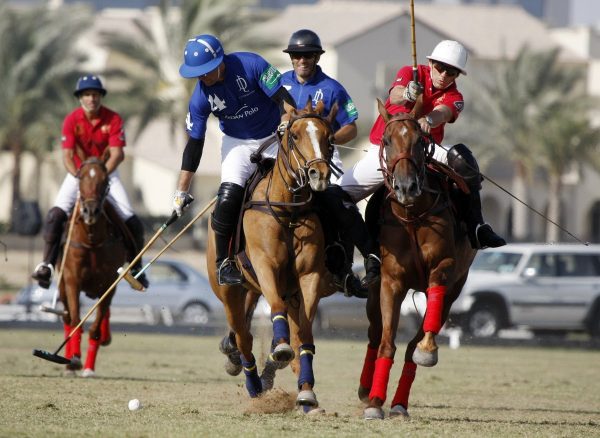 Habtoor Polo, Mahra Polo, Abu Dhabi and Zedan qualified for the Silver Cup 2012 semifinals after the last two matches played today in which Mahra defeated Abu Dhabi by 9-6 and Bin Drai did the same with Zedan by a 6-5 score.

With this results the semifinals on tuesday, will be Habtoor vs Zedan and Mahra against Abu Dhabi .

Today´s polo matches brought a lot of emotion and expectation until the end to the Dubai Polo & Equestrian Club.

There was too much to play for, four teams were fighting for three places in the semifinals.

In the first match, Zedan Polo and Bin Drai played a tough match that never had a team with a huge difference in the score.

Bin Drai opened the match with a goal by Nicolás Petracchi that Zedan responded quickly thanks to Nachi Heguy. Again Bin Drai took the lead with a 60 yards penalty by Juanjo Brané and Rodolfo Ducos Zedan´s number three player score to even the match at 2 all.

Both teams maintained the same line during second and third chukker with not more than one goal difference in the scoreboard.

In the last chukker Bin Drai took a two goal lead with Petracchi and Mohammed Bin Drai adding a goal each but in the last seconds of the game Nachi Heguy reduced distance to the definitive Bin Drai 6-5 victory.

Mahra´s back, Nacho González was the MVP of the match scoring eight of the nine goals of his team in the 9-6 victory against Abu Dhabi

Two fantastic chukkers gave Mahra a comfortable advantage of 7-2 at the end of the second period.

Abu Dhabi´s replied came in the third chukker with three consecutive goals, two by Alfredo Capella and one by Pato Neves, that left the score 7-5 for Mahra.

The fourth chukker started with another goal by Neves but with a quick reaction by Mahra with two new goals by Agustín Canale and González to take the score to a final 9-6 result for Rashid Al Habtoor´s team.