During the last few days, the United Arab Emirates became the hottest sport for many superstars from around the world, large number of Royals not only from the Middle East and at least six-digit figure of high-net-worth individual (HNWI). Monte Carlo and Las Vegas can’t be compared to UAE in riches, glitz and excitement on offer. 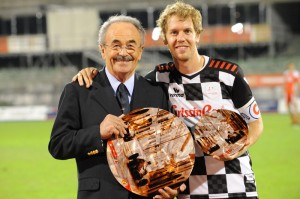 Rich, well planned calendar of events have attracted the international society with concerts, races, exhibitions and charity events. Gathering talents and philanthropists of different backgrounds and nationalities is not so difficult, when you have a top notch of events such as: Formula 1 Etihad Airways Abu Dhabi Grand Prix, Dubai Motor Show, Dubai Motor Show, Dubai Airshow, Dubai International Jwellery Week, the premiere of “Bokra” and 31st International Arab Children Congress in UAE’s capitol. In addition, the Dubai Boat Show will begin on 17th of November.

Kim Kardashian, Eva Longoria, Yanni and few others have visited the United Arab Emirates in the beginning of November 2011.Tom Cruse has confirmed his attendance of the opening nigh of the Dubai International Film Festival in the beginning of December, along with a handfull of movie stars.

Royals from UAE, Saudi Arabia, Qatar, Kuwait, Bahrain and Oman have been spotted all around Dubai, at the exhibition halls of the Dubai World Trade Centre,  at the malls and