Dubai has been named the Middle East’s “2011 World Festival and Event City” by the International Festivals and Events Association (IFEA). The announcement was made earlier this month during the 56th Annual IFEA Convention ‘&’ Expo in Fort Worth, Texas, United States. 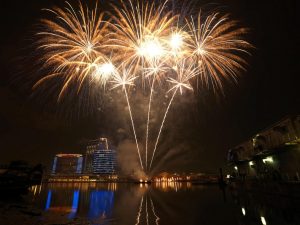 Laila Suhail, CEO of Dubai Events and Promotions (DEPE), an agency of the Department of Economic Development (DED) and organizer of the Dubai Shopping Festival and Dubai Summer Surprises, received the award at a ceremony from IFEA.

The IFEA, in its statement, cited Dubai’s “strategic location in the heart of one of the world’s richest regions midway between the Far East and Europe as being a key element in its success. Although Dubai’s economy was built on the oil industry, the emirate’s model of business drives its economy, with the effect that its main revenues are now from tourism, real estate, and financial services, similar to that of Western countries. Dubai has recently attracted world attention through many innovative large construction projects and sports events”.

“From a modest trading post to a modern bustling metropolis in just over three decades, Dubai has burst on to the global scene as perhaps one of the most happening cities in the world with its ambitious projects and unique events. With its lavish reputation, Dubai continues to impress with world-class events such as the annual Dubai Shopping Festival, Dubai International Film Festival, Dubai World Club, and Dubai Desert Classic golf tournament”, IFEA added.

“The Dubai government realized the economic importance of festivals in the 1990s and developed the infrastructure to establish the emirate as a hub for international events, Sheikh Ahmad said.

“The fruits of this long-term strategy have materialized with the events and festivals industry being vital in energizing various economic sectors in the city, whether it was the hospitality sector, the tourism sector or the retail sector, which are all main arteries that pump income into the local economy as non-oil industries,” he added.

“It was due to the unique understanding and harmonic collaboration between the government and the private sector, working hand in hand towards one aim, that helped Dubai’s festivals and celebrations continue even in the times of the global economic crisis, and we believe that that was a crucial factor when awarding Dubai as the “2011 World Festival ‘&’ Event City,” Sheikh Ahmed further said.

“For more than a decade and a half now, since the launch of the first edition of the Dubai Shopping Festival in 1996, Dubai has been raising the bar of excellence in organizing and hosting world class events and festivals. It paid off today with this award,” Suhail said.

“We are extremely honored and humbled by receiving this prestigious award on behalf of the city of Dubai” said Suhail. “This award is a materialisation of Shaikh Mohammed’s, vision to position Dubai as a global destination for business and leisure” “We share this great honour with our partners from the government departments and private entities that supported us and shared our passion and drive to create and organize festivals and events that put Dubai at the leading pole of the Festival Industry across the region. For more than a decade and a half now, since the launch of the first edition of the Dubai Shopping Festival in 1996, Dubai has been raising the bar of excellence in organizing and hosting world class events and festivals, it paid off today with this award,” Suhail added.