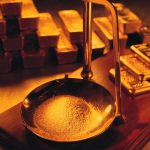 Last week, the yellow metal continued to face selling pressures and as of now it approaches a reading last seen in July. This development marks the fourth week in which gold has posted declines, as markets endure head winds from weak U.S. and European economies.

However, on Thursday positive data was released in the U.S., providing respite to the safe haven commodity as it tries to rebound from the losses. Germany’s approval on the expansion of the bailout package for Euro nation areas is also contributing to the gain as global equity markets try to spring back during the latter half of the week.

The drop in gold prices following the FED announcement of altering its balance sheet could see the yellow metal register its biggest drop in September since October 2008.

Looking ahead, demand from India, the world’s largest consumer of gold, is expected to strengthen as the wedding and festival season approaches. Though gold may see rising pressures from a short – term perspective, governments and central banks are likely to intervene to slow the de-leveraging process, which could possibly increase inflationary fears in turn helping the yellow metal rally in the long run.