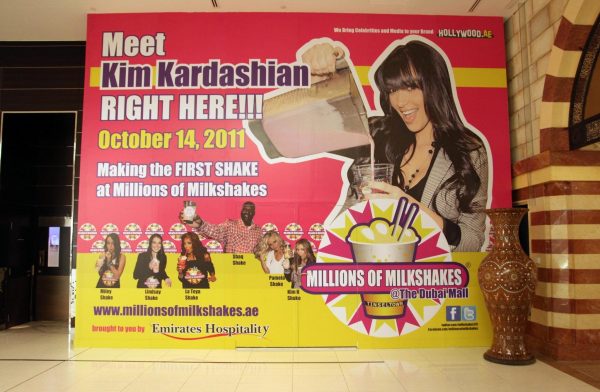 Fans of Kim Kardashian will have the chance to meet her in person in Dubai Mall soon. The world’s most famous milkshake bar, ‘Millions of Milkshakes’ will introduce US reality TV stars Kim Kardashian and her mother Kris Jenner to the UAE to celebrate the grand opening of the first franchise outside of United States in The Dubai Mall this October. Kim Kardashian and Kris are making a three-day visit to the UAE and they will create their signature shakes at the launch on the evening of Friday 14 October 2011.

Millions of Milkshakes is a family milkshake bar, where every teenager wants to be seen and where parents can’t get their children to leave, as Kim Kardashian. The concept is simple – customers design their own perfect milkshake with over 50 delicious toppings to choose from. Any of these toppings can be blended with a choice of ice cream or non-dairy ice cream to make their own custom shake or sundae. The Millions of Milkshakes menu is designed purely by the customer’s choice, ranging from healthy alternatives to candy, chocolates, cereals or protein boosts. Whatever the customer desires, Millions of Milkshakes gives them a milkshake tailored to their own taste.

“I am so excited to be working with Millions of Milkshakes and Emirates Hospitality to launch my very own signature shake in the Middle East and I can’t wait to introduce it to my fans in the UAE!” says US reality TV star Kim Kardashian. 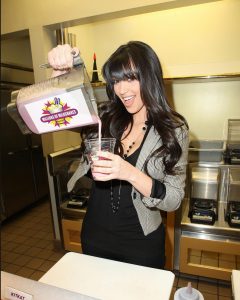 Kim Kardashian joins a long list of Hollywood actors, musicians, and athletes who have tried or created shakes at Millions of Milkshakes including Miley Cyrus, Pamela Anderson, Shaquille O’Neal, La Toya Jackson, Lindsay Lohan, David Beckham, Leonardo DiCaprio, Reese Witherspoon, Mallika Sherawat, Adam Sandler, and the Jonas Brothers. The Millions of Milkshakes outlets have become a hot-spot for celebrities as Kim Kardashian, who love milkshakes and they can create their own signature shakes which are then featured on the menu.

The two original Millions of Milkshakes in Westfield Culver City and West Hollywood, California, already have a huge following and are a firm favourite among fans and celebrities like Kim Kardashian. In less than 24 months, Millions of Milkshakes has become one of the most talked about brands in America and its Hollywood red carpet celebrity milkshake events have been seen by over 500 million people around the world.

The magic behind each celebrity shake is due to the Millions of Milkshakes founder and the media mogul behind Hollywood.TV, Sheeraz Hasan, whose dream of opening an outlet in the UAE has been realised thanks to the partnership with Emirati businessman, Aldaba Saif Al Darmaki, Chairman and Founder of Emirates Hospitality.

“It is an honor to be working with Emirates Hospitality for the launch of Millions of Milkshakes in the UAE,” says Sheeraz Hasan. “After being approached by numerous parties across the UAE eager to get hold of the master license of Millions of Milkshakes, it was not until I met with the young Emirati Aldaba Saif Al Darmaki, a visionary businessman from Abu Dhabi, that I found the perfect partner. We both share a passion for unique brands, media, youth, culture and a strong understanding of the power of celebrity branding.

“We are delighted to be joined by our dear friends Kim Kardashian and Kris Jenner to celebrate this monumental event and we look forward to giving them a great first introduction to the dynamic city of Dubai. We will be inviting Kim’s and Kris’ thousands of fans across the UAE to come and see them as they make their own signature shakes in The Dubai Mall in October, so watch this space!” Sheeraz added.

Emirates Hospitality focuses on youth-orientated businesses and therefore, a partnership with Millions of Milkshakes was a natural fit says the Chairman and Founder of Emirates Hospitality, Mr Aldaba Saif Al Darmaki. “I’m always on the lookout for unique business concepts and it is my mission to bring successful brands to the UAE that will really appeal to the people living and visiting the region.” said Mr Al Darmaki. “After witnessing the huge success of Millions of Milkshakes in the US, I was very keen to bring the concept to my home country. I’m thrilled to be partnering with Millions of Milkshakes in its first ever overseas project and I am positive we will have great success in our growing region.”

Sheeraz Hasan adds, “This is only the beginning for the Middle East. We will bring many more Hollywood, Bollywood and Middle Eastern stars to UAE to create their very own signature milkshakes for their fans here in the region!”