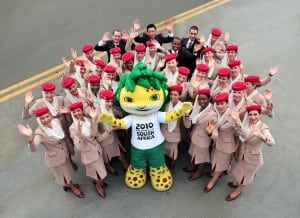 Zakumi, the Official Mascot of the 2010 FIFA World Cupâ„¢, along with Emirates, Official FIFA Partner, celebrated with 32 of the award-winning airlineâ€™s cabin crew the one month countdown to the kick-off of football’s greatest tournament.

Zakumi was welcomed to the airlineâ€™s home base of Dubai by members of Emiratesâ€™ multicultural cabin crew, representing the 32 nations that will be taking part in the 2010 FIFA World Cupâ„¢, which starts on 11th June in South Africa.

Emirates, as the Official Airline of the 2010 FIFA World Cupâ„¢, will be flying fans from around the world to South Africa throughout the tournament to support their teams, and live the unforgettable experience of a FIFA World Cupâ„¢.

Maurice Flanagan, Executive Vice Chairman, Emirates Airline & Group, said:Â  â€œIt is hard to believe that it is only 32 days to go until all eyes will turn to South Africa for this much awaited sporting spectacular. Emirates has been busy putting into place all of our various FIFA-related activities across our network. We are looking forward to flying in football fans from the more than 100 destinations across the six continents that we serve non-stop from Dubai, to South Africa.

â€œBeing an Official FIFA Partner means that we are able to use our sponsorship to bring the fans around the world to South Africa, but also through our partnership with the International FIFA Fan Fests we are able to take South Africa and the tournament to the world.â€

Emirates serves South Africa with five daily, non-stop flights from Dubai into the three gateways of Johannesburg, the host city for the opening and final matches, Durban and Cape Town.

Emiratesâ€™ partnership with FIFA began at the 2006 FIFA World Cupâ„¢ when it became the first airline to be a sponsor of the prestigious sporting event. Following on from the success of the tournament in Germany, Emirates then cemented its status as an Official FIFA Partner up to and including the 2014 FIFA World Cupâ„¢.