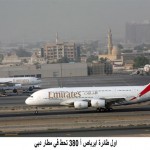 Emirates ushered in a new era of aviation Tuesday when its first A380 touched down in Dubai.

His Highness Sheikh Ahmed bin Saeed Al-Maktoum, Chairman and Chief Executive of Emirates Airline and Group, was on board the new generation double-decker plane, which arrived in Dubai at 17:46 hours. He led a delegation of senior Emirates executives that flew in from Hamburg on the aircraft. A media group numbering around 70 was also on board.

HH Sheikh Ahmed said: “The arrival of our first A380 in Dubai is hugely significant for the city, Emirates and the Middle East aviation market.

”This new generation aircraft takes the aviation industry to another level and will provide passengers with an unrivalled flying experience. Emirates is proud to be the A380 launch customer in the Middle East, the base for one of the world’s fastest growing aviation markets.” The Emirates A380 landed smoothly at Dubai International Airport, which is designed to handle all aircraft including the double-decker plane, then taxied before stopping at Gate 23.

An official handover ceremony in Germany was held yesterday to celebrate the A380’s delivery to Emirates. During the next few days, standard checks and maintenance will be carried out on the A380 – which will have three classes, comprising a 14-seat First Class, 76-seat Business Class and 399-seat Economy Class – before its inaugural flight to JFK Airport in New York on 1st August.

Following the A380’s arrival in New York, Emirates is taking the opportunity to showcase the first of its 58 double-decker aircraft during promotional visits to San Francisco and Los Angeles.