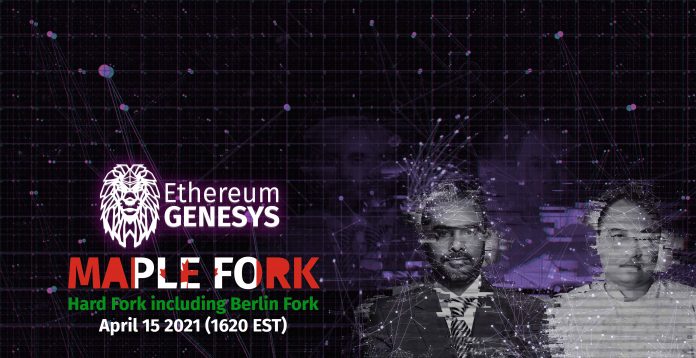 This hard fork initiated by the Ethereum GeneSys Foundation, known as the ‘Maple Fork’, has been undertaken to save the Proof-of-Work community, and to produce a forked coin called Ethereum GeneSys (ETG). The foundation also plans to make future changes to the Blockchain consensus, including those related to significant reduction of gas fees, Proof-of-Work security, as well as performance improvements.

One of the reasons for this hard fork is Ethereum’s ‘Difficulty Bomb’, which is introducing increasingly difficult puzzles into the algorithm miners use to earn ETH.  This is leading to the onset of Ethereum’s ‘ice age’, which will be used to transition to the Proof-of-Stake Blockchain, where rewards will be distributed on the basis of staking or coin ownership.

Noted Crypto Whale and Chairman of the IBC group, Khurram Shroff, recently pledged his support to the Ethereum GeneSys Foundation.  He is considered to be one of the largest Bitcoin Miners and HODlers in Blockchain history. Khurram was instrumental in the beacon chain for the launch of ETH 2.0 reaching its required threshold, with his group staking one hundred thousand ETH.  He believes the hard fork is necessary to save the Proof of Work Blockchain community.

“The ‘Difficulty Bomb’ intends to end PoW mining on Ethereum, by making blocks impossible to mine”, said Earl Mai, founding member of #EthGen.  Earl further elaborates “The Ethereum GeneSys Foundation has disabled this code forever, so that mining can continue indefinitely. All parameters needed to enable the fork in the ‘geth’ and ‘openethereum’ code bases are submitted on GitHub for easy setup of nodes, including fork configuration changes”.

Ethereum 1.0 runs on many different nodes and client software, however, the Ethereum GeneSys Foundation is focusing only on the top three.  These cover over 96% of the 11,500 nodes operating today.

Earl concluded “It is not only important to have node diversity based on codebase, but geographically diverse hosting as well. The long term goal is to have Hybrid approach, with both PoW and POS in their respective mainline branches, for all to participate”.