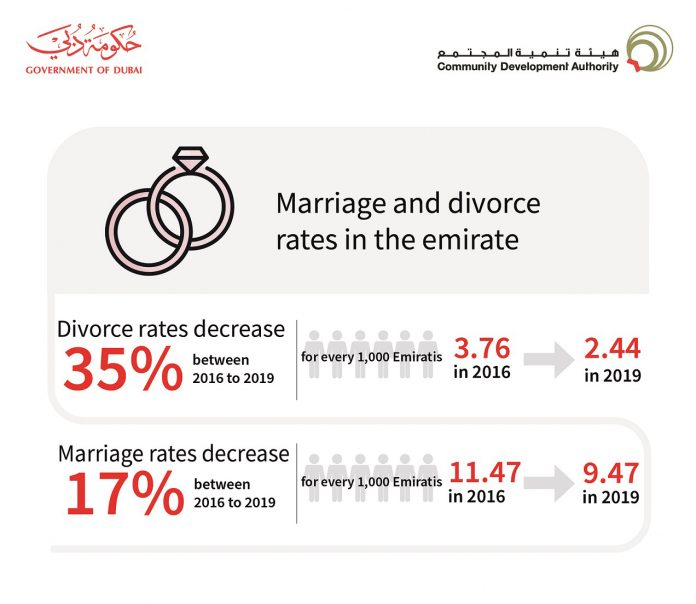 A new statistics report released by the Community Development Authority in Dubai (CDA) has shown a 35 per cent decrease in divorce cases in the emirate between 2016 to 2019. The study, conducted in collaboration with the Dubai Statistics Center and Dubai Courts highlights that divorce rates for every 1,000 Emiratis had dropped from 3.76 in 2016 to 2.44 in 2019–covering divorce cases where both parties are Emiratis or with one of the partners in the marriage being Emirati.

The scope of the report included all marriages and divorces that were registered in Dubai Courts over the four-year period. The statistical results were calculated based on averages generated from surrounding social and environmental factors. The report also relied on calculations made based on divorce rates recorded per 1,000 citizens–which was deemed as an essential factor utilized to determine accurate rates of divorce recorded in the emirate.

The report also highlights the positive insights received in the move to drive in a reduction in divorce rates over the last four years, which showed a 33.5 per cent drop in the net divorce rate for married couples of 7.95 in 2019 as compared to the 11.95 figure posted in 2016.

Meanwhile, the report revealed a 17 per cent decrease in marriage rates from 9.47 in 2019 as compared to the 11.47 that was recorded in 2016, where both parties were Emiratis or at least one of the partners was Emirati.

Huraiz Al Mur Bin Huraiz, CEO – Social Care & Development Sector at Community Development Authority, said: “We are proud to have collaborated with Dubai Statistics Center and Dubai Courts on this project, which aims to show the marriage and divorce rates in Dubai during the last four years. The report showed us that there are different methods to use in calculating marriage and divorce rates based on various factors, which indicate the way these rates were properly measured based on comparisons on annual divorce and marriage cases and finding the differences between them.”

He added, “Over the last few years, we have researched on the best way to measure divorce rates–trying to determine the closest and best global results that can be utilized in making key decisions related to family stability. We expect the results of this report to be accurate, especially as it deals with a variety of statistical factors and approved by global institutions.”

Bin Huraiz also pointed out that the rates recorded in the emirate are commensurate with the averages calculated on a global scale. He further shared that the results of the study will be used to develop plans and strategies aimed towards enhancing family stability and cohesions and to also drive in an increased awareness on how to improve marriages.

“The reduction in marriage rates by 17 per cent is something that we should take in seriously. This is because we are still a young country and have a large percentage of young people of marrying age. In line with this, the CDA remains steadfast in its commitment to work closely with its partners in the move to develop plans that seek to increase awareness on the repercussions of early marriages and to support those coming to marriage to increase this percentage rates,” he concluded.