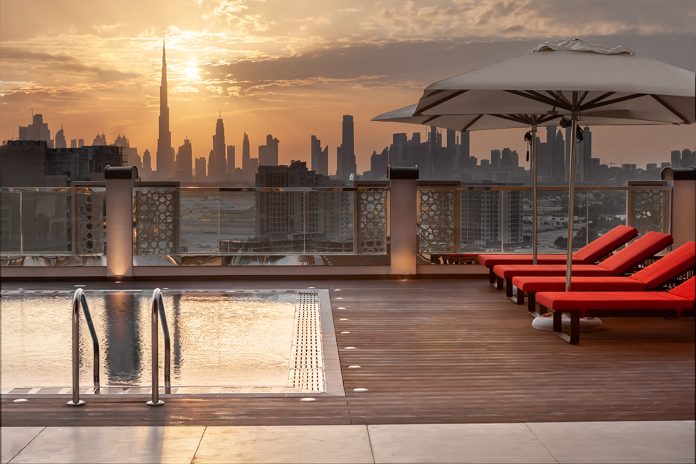 The Arabian Travel Market, the region’s leading international travel and tourism event brought together over 2,800 exhibitors from across the world. The event promise to further raise Dubai’s profile as an industry hub by showcasing new developments, destinations, offers and technologies and providing a platform for companies to network and do business.

Dubai’s own offerings in the travel and tourism sector will be one of the cynosures of attention at the event to be held from 28 April to 1 May. In 2018, Dubai overcame the impact of global economic headwinds, to emerge as a growth hotspot in the worldwide tourism map. According to a report by the Department of Tourism and Commerce Marketing, the emirate welcomed 15.92 million visitors in 2018, an increase of 0.8 per cent from a year earlier. Dubai was ranked the world’s fourth most visited city for the fourth year in a row by the Mastercard Global Destination Cities Index (GDCI) 2018 and topped the list of global cities with the highest international overnight visitor spend for the third year in a row.

Issam Kazim, CEO of Dubai Corporation for Tourism and Commerce Marketing (DCTCM), said: “Our presence at Arabian Travel Market forms a core part of our efforts to raise awareness of Dubai as a diverse travel destination to global audiences, and we are pleased to extend our support once again to the 26th edition of this influential event. We remain focused on strengthening collaborations with our network of industry partners, in turn underlining the enormous diversity that the emirate offers global travellers.”

“Keeping in mind this year’s theme of innovation and technology, Dubai as a destination has already embraced a ‘digital, mobile and social first’ agenda that places future readiness at its core while promoting the adoption of disruptive technology. As a global hub of innovation, we will continue to support public-private sector partnerships to evolve our product offering and the way we engage with today’s digitally-savvy consumers. Keeping ahead of the global competition, we are anchored by an unwavering vision of establishing Dubai as the number one most-visited and innovative city in the world,” he added.

Dubai’s ability to sustain its tourism growth over the past few years has been driven, among others, by a sustained investment in infrastructure. In the next half a decade, it is set to complete the construction of a series of mega projects that will features some of the world’s most spectacular tourist attractions.

Bluewaters Island, a new tourism project adjacent to Dubai Marina, will be home to a number of residential and commercial projects such as penthouses, shopping malls and beach clubs. The centerpiece of Bluewaters Island is Ain Dubai, the largest Ferris wheel in the world. Another major coastal tourist attraction being built in Dubai is Marsa Arab that encompasses two man-made islands. The development will add 2.2 km of beach frontage to Dubai’s coastline, with one of the islands dedicated to entertainment and family tourism.

Dubai is also building the Deira Islands Night Souk, billed as the largest night market in the world. The venue forms part of the AED6.1 billion Deira Island, a 15.3 sq kilometre waterfront city that features four islands. Another new project, the Dubai Creek Harbour, will be home to the city’s tallest building, the $1 billion Santiago Calatrava-designed Dubai Tower. The 6 million sq metre Dubai Creek Harbour will be twice the size of Downtown Dubai when it is fully completed in 2025.

Meanwhile, Emirates, Dubai’s flagship airline, carried over 59 million passengers on about 3,700 passenger flights on average per week in 2018. At a time when the global aviation industry is experiencing a slowdown, Emirates operated over 192,000 flights, with its fleet of 274 aircraft in 2018 to its global network of 157 destinations.

Never used to sitting on its laurels, Dubai is seeking to build on the substantial growth it has seen in the past decade by setting an ambitious target of welcoming 25 million visitors by the year 2025. The target, part of the Dubai Tourism Strategy launched last year, aims to strengthen Dubai’s position as one of the most visited cities in the world. Designed to provide a strong impetus to its global competitiveness, the Strategy is focused on ensuring that Dubai is not impacted by fundamental changes in the future. The emirate has already rolled out plans to boost its growth in major tourist exporting markets and diversify sources from high-potential markets.

Tourist inflows to Dubai already boast a diverse global spread. Last year, Western Europe emerged as the largest contributor of overnight visitor volumes for 2018, commanding a 21 per cent share, to maintain its pole position from 2017. This was closely followed http://skillovate.com/game-development/by the GCC and South Asia, contributing 18 and 17 per cent of all international visitation to the city respectively. North Asia and South-East Asia regions accounted for 11 per cent.

The close proximity markets across the MENA region also delivered steady growth volumes of ten per cent while Russia, the wider CIS and Eastern Europe collectively delivered nine per cent of the total visitation, a two per cent increase from 2017. The Americas and Africa each contributed six per cent of the volume base, and Australasia rounded off the regional mix with two per cent of market share in 2018, largely driven by stop-over travellers.

The last year has seen Dubai ramping up efforts to attract more tourists from Russia, the CIS, Latin America and the Nordics, especially Sweden. Promotional activity in China was boosted by a “highly successful” marketing campaign in collaboration with Chinese social media influencers in 2017.

The emirate is also making a renewed push to grow sectors like cruise tourism for which it has shown considerable growth potential. Last year, the ‘Dubai Cruise Terminal’ was made the main hub for cruise tourism in Dubai. The sector was further boosted by a strategic partnership between Meraas and Carnival Corporation aimed at transforming Dubai into a major regional maritime tourism hub.

Dubai is also seeking to push the frontiers of passenger experience and technology. Emirates is gearing up to launch the world’s first integrated ‘biometric path’ at Terminal 3, Dubai International airport, which will enable passengers to walk through a tunnel and be “cleared” by immigration authorities without human intervention or the need for a physical passport stamp.

Major changes in the UAE’s visa regime last year have also significantly enhanced Dubai’s status as a tourist-friendly destination. Transit passengers are now exempted from all entry fees for the first 48 hours and a transit visa can be extended for up to 96 hours for a fee of only Dh50. Obtaining a transit visa is easily facilitated by a number of express counters across UAE airports.

With a series of regulatory, infrastructure, technological and marketing initiatives to boost tourism, Dubai is all set to rise in the ranking of the world’s most visited cities. The next few years could well see the city developing into the world’s most popular destination.