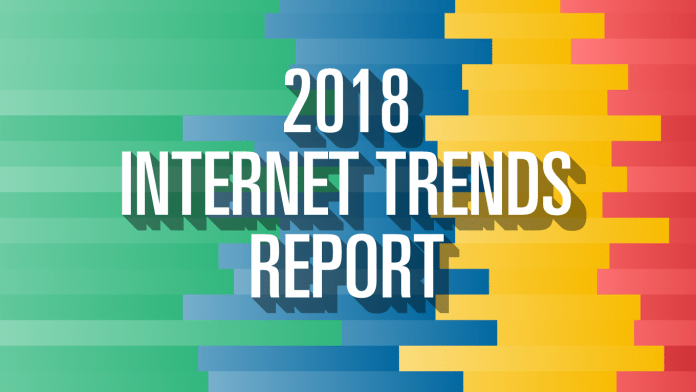 Legendary venture capitalist and analyst with Morgan Stanley Mary Meeker has just released the 2018 version of her famous Internet Trends report. It covers everything from mobile to commerce to the competition between tech giants. Check out the full report below.

Internet adoption: As of 2018, half the world population, or about 3.6 billion people, will be on the internet. That’s thanks in large part to cheaper Android phones and Wifi becoming more available, though individual services will have a tougher time adding new users as the web hits saturation.

Mobile usage: While smartphone shipments are flat and internet user growth is slowing, U.S. adults are spending more time online thanks to mobile, clocking 5.9 hours per day in 2017 versus 5.6 hours in 2016.

Mobile ads: People are shifting their time to mobile faster than ad dollars are following, creating a $7 billion mobile ad opportunity, though platforms are increasingly responsible for providing safe content to host those ads.

Crypto: Interest in cryptocurrency is exploding as Coinbase’s user count has nearly quadrupled since January 2017

Voice: Voice technology is at an inflection point due to speech recognition hitting 95% accuracy and the sales explosion for Amazon Echo which went from over 10 million to over 30 million sold in total by the end of 2017.

Daily usage – Revenue gains for services like Facebook are tightly coupled with daily user growth, showing how profitable it is to become a regular habit.

Tech investment: We’re at an all-time high for public and private investment in technology, while the top six public R&D + capex spenders are all technology companies.

Amazon: More people start product searches on Amazon than search engines now, but Jeff Bezos still relies on other surfaces like Facebook and YouTube to inspire people to want things.

Subscription services: They’re seeing massive adoption, with Netflix up 25%, The New York Times up 43%, and Spotify up 48% year-over-year in 2017. A free tier accelerates conversion rates.

Education: Employees seek retraining and education from YouTube and online courses to keep up with new job requirements and pay off skyrocketing student loan debt.

Transportation: People are buying fewer cars, keeping them longer, and shifting transportation spend to rideshare, which saw rides double in 2017.

Enterprise: Consumerization of the enterprise through better interfaces is spurring growth for companies like Dropbox and Slack.

Privacy: China has a big opportunity as users there are much more willing to trade their personal data for product benefits than U.S. users, and China is claiming more spots on the top 20 internet company list while making big investments in AI.

Immigration: It is critical to a strong economy, as 56% of top U.S. companies were founded by a first- or second-generation immigrant.