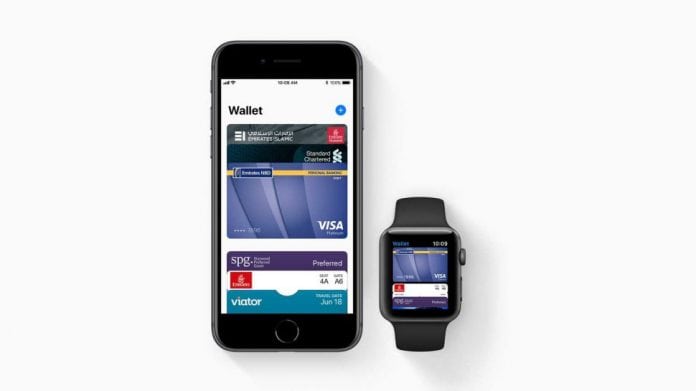 Apple’s plans for global contactless payments domination have taken another step forward with the arrival of Apple Pay in the UAE today.

The service is available on Macs that are 2012 or newer for online payments as well as iOS devices such as the iPhone SE, iPhone 6 and later, and Apple Watch.

At launch you’ll be able to set up Apple Pay will through Visa or Mastercard from the following six banks: Emirates NBD, Mashreq, HSBC, RAKBANK, Standard Chartered and Emirates Islamic. More banks are expected to join and, considering that Apple Pay supports American Express in other regions, it’s probably a matter of time before that is also supported in the UAE.

According to Apple “tens of thousands” of locations are supporting Apple Pay in the UAE. Some o these include Starbucks, Debenhams, Boots, Virgin Megastore, Carrefour UAE, VOX Cinemas and Ikea. Apple also listed three apps that support Apple Pay which are Ounass, Namshi, and Babyshop.

The UAE, along with Sweden, Finland and Denmark, will bring the total number of countries with Apple Pay to twenty. This will be the first time the service is available in the Middle East. Apple Pay will compete directly with Samsung Pay, launched in April, and BEAM, an e-payment service available since 2012.

Apple Pay uses a process called “tokenization” to make payments secure. A token replaces all of a user’s unique, sensitive data with information that cannot be used in any other way. Users will be able to see a short list of all recent payments made with Apple Pay, but that’s it.

Digital wallets have been getting increasingly popular in the UAE, even if their use has not grown elsewhere in the Gulf Cooperation Council (GCC). The growth here is being attributed to development of the country’s payment infrastructure, especially in terms of NFC-enabled POS (point-of-sale) terminals, merchant acceptance and developing user confidence in contactless payments.

Euromonitor estimates that 50 per cent of the POS Terminals in the UAE are NFC enabled and expects growth of nearly 52 per cent during the year. They estimate the number of transactions through digital wallets would reach nearly 1.7 million during 2017.

How to use Apple Pay

What do you need to use Apple Pay