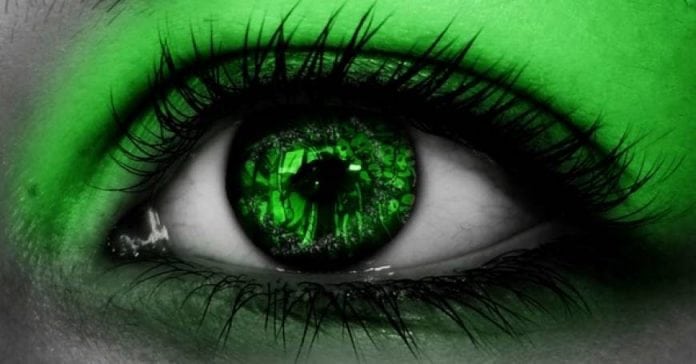 Jealousy typically rears its head when we think a rival threatens a valuable relationship, such as a potential new lover for our spouse, for example, or a new friend for our own BFF. The “green-eyed monster” brings on strong feelings that can include fear, insecurity and anger. Unrestrained jealousy can have negative health effects and in extreme cases can even lead to violence.

But jealousy also plays a positive role in social bonding, by signaling that the relationship needs attention. It may be particularly important for keeping a couple together in monogamous species like most humans. However, little is known about the biology of jealousy and its role in the evolution of long-term pair bonding.

Jealousy leads to increased brain activity in areas associated with social pain and pair bonding in monogamous monkeys, finds a study published in open-access journal Frontiers in Ecology and Evolution. The study is the first monogamous primate model for the neurobiology of jealousy, a powerful emotion that is difficult to study in humans and not typically studied in animals.

Understanding the neurobiology and evolution of emotions can help us understand our own emotions and their consequences. Jealousy is especially interesting given its role in romantic relationships, and also in domestic violence.

Most research on pair bonds has used prairie voles, a socially monogamous rodent. However, this may not be as applicable to humans and other primates.

The researchers turned to coppery titi monkeys, a monogamous primate where adults form a strong pair bond. Bonded individuals form an attachment with their partner, show mate-guarding behavior and become distressed when separated, similar to a romantic relationship in people.

Male titi monkeys show jealousy much like humans and will even physically hold their partner back from interacting with a stranger male.

The researchers induced a “jealousy condition” in male monkeys by placing them in view of their female partner with a stranger male. As a “non-jealous” control, on a different day the monkeys were placed in view of a stranger female with a stranger male. After 30 minutes of viewing — during which the behavior of the males was filmed — brain scans were performed to see which areas were activated by each condition. The researchers also measured the levels of various hormones thought to be involved in pair bond formation, mating-related aggression, and social challenge.

Previous studies identified the lateral septum as being involved in the formation of pair bonds in primates. The new research indicates that in titi monkeys, this region of the brain also plays a role in maintaining the pair bond.

Increased activity in the cingulate cortex fits with the view of jealousy as social rejection.

The jealous males showed hormonal changes as well, with elevated levels of testosterone and cortisol. Those who spent the longest time looking at their pair mate next to a stranger male showed the highest level of cortisol, an indicator of social stress. The rise in testosterone was expected due to its association with mating-related aggression and competition.

Taken together with the rodent-based model, the titi monkey study suggests that pair bond formation involves areas of the brain involved in social memory and reward, while maintenance of the bond appears to be based on negative reinforcement, that is, avoiding the pain of separation. The locations of these areas differ between rodent and primate brains, but the underlying neurochemistry seems to involve the same hormones.

Monogamy probably evolved multiple times so it is not surprising that its neurobiology differs between different species. However it seems there has been convergent evolution when it comes to the neurochemistry of pair bonding and jealousy.

The question remains as to whether jealousy is the same in female titi monkeys as in males.

For the study, researchers only looked at males. Female titi monkeys — and humans — also show jealousy, and the neurobiology might be the same or different. Sex differences in the neurobiology of social behavior may ultimately explain questions like why more boys than girls have autism, and why men and women act differently in romantic relationships.