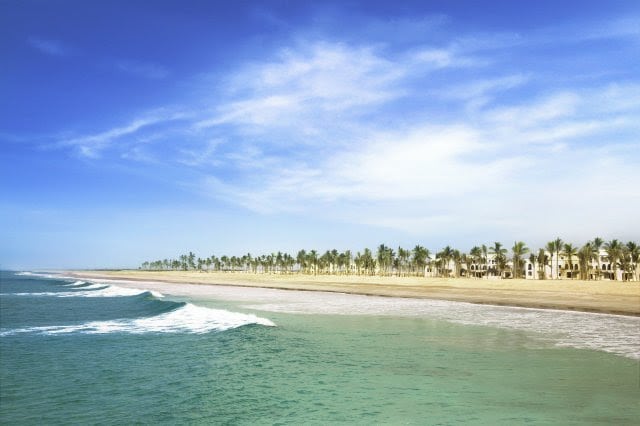 Spend a holiday exploring the natural beauty and historic landmarks by embarking on excursions in Salalah, the capital city of the Dhofar region in the Sultanate of Oman. Salalah, the birth place of Sultan Qaboos, boasts perfect weather all year round and incredible mountainous landscape skirted by sandy white shores of the Indian Ocean. Salalah is home to the beautiful Dhofar mountain range, its lush greenery and eerie mist creating an ethereal setting during Khareef.
The five-star Salalah Rotana Resort officially opened in March 2014 and is only 20km from the airport. This oasis of comfortable accommodation is serviced by dedicated trained staff and an outgoing Concierge who recommends the below top ten activities for exploring the destination.
Wadi Darbat
Guests can spot the entrance to the famous Wadi by the jagged cliff that extends into a stunning waterfall where they can enjoy a splash in the rock pools.

Mirbat
Explore the underwater world in Mirbat where your chances are high of spotting sharks, octopus, turtles and if you’re really lucky a humpback whale.Jebel Samhan Nature Reserve
Stretched over an area of 4,500 km2, the Nature Reserve is a rare refuge in the world where visitors can spy Arabian leopards in the wild, wolves, striped hyenas and caracal.

Mughsail Beach and Al Marneef Cave
Al Marneef Cave lies in Shatti Al Mughsayl located approximately 40 kilometres from Salalah overlooking the Arabian Sea. The cave is actually an open sided sheltered area formed from eroded limestone, a stone’s throw away from the three impressive blowholes that are particularly entertaining to watch during Khareef when the water jets up 28m in the sky. Mughsail Beach offers the stunning scenery of powerful waves in contrast with the surrounding rugged desert, a popular bird watching site and area for camels to gather in the mornings.
Rub’Al Khali (the Empty Quarter) and Lost City of Ubar
The route to reaching Rub’Al Khali translating to the Empty Quarter, includes an enchanting drive through the Nedj area which is home to the most treasured Frankincense trees in Dhofar. The Lost City of Ubar, also known as the Lost City of Atlantis, was once the Frankincense capital of the ancient world and is now a UNESCO ‘Land of Frankincense’ world heritage site. 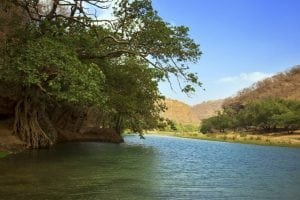 This scenic road trip worth taking lies between the mountain passes taking you through wadis blanketed in green trees which are particularly lush and fragrant during Khareef. The road leading towards Rakyut and Dalkut is situated on the Omani border with Yemen is known for its spectacular views.
Khawr Rawri
The coastal wetland area which was once considered a popular trade centre is a modern day bird watchers’ haven.
Teiq Sinkhole
Nestled at the endpoint of two streams, the Teiq Sinkhole is the third largest sinkhole in the world. The surrounding walls of the sinkhole are extremely steep and hold a volume of approximately 90 million m³.
Souq Al Haffa
Located on the beachfront near the Sultan’s Palace is the bustling Souk Al Haffa, filled with quaint shops pleasantly arranged making it ideal for a late afternoon meander, famous for its variety of Frankincense and local perfumes of ukhoor, attar and some of the rarest high end products such as hawjari.