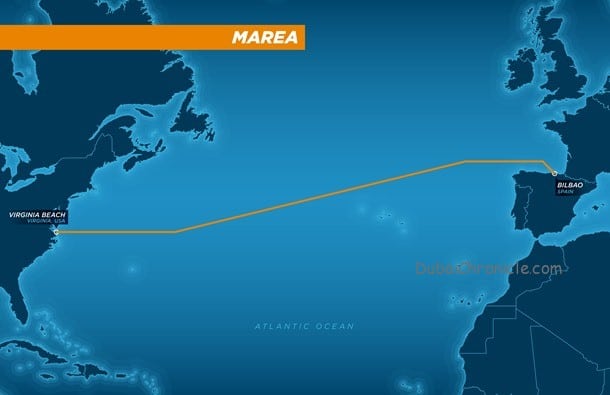 A new state-of-the art subsea cable will run across the Atlantic from the fourth quarter of 2017. Dubbed “MAREA” the project is a joint-venture by Microsoft and Facebook. The goal of it is to build a global cloud infrastructure that will help meet the growing customer demand for high speed, reliable connections for cloud and online services for Microsoft, Facebook and their customers. Construction of the cable will commence in August 2016 with completion expected in October 2017.

There is an ever-increasing customer demand for high speed, reliable connections for Microsoft cloud services, including Bing, Office 365, Skype, Xbox Live, and Microsoft Azure. As the world continues to move towards a future based on cloud computing, tech giants will need to building out an unprecedented level of global infrastructure required to support ever faster and even more resilient connections to cloud services. This robust, global infrastructure will enable customers to more quickly and reliably store, manage, transmit and access their data in the Microsoft Cloud. Before all, the largest portion of the company’s revenues come from the sales of business software.

MAREA will be the highest-capacity subsea cable to ever cross the Atlantic – featuring eight fiber pairs and an initial estimated design capacity of 160Tbps. The new 6,600 km submarine cable system, to be operated and managed by Telxius, will also be the first to connect the United States to southern Europe: from Virginia Beach, Virginia to Bilbao, Spain and then beyond to network hubs in Europe, Africa, the Middle East and Asia. This route is south of existing transatlantic cable systems that primarily land in the New York/New Jersey region. Being physically separate from these other cables helps ensure more resilient and reliable connections for Microsoft’d customers in the United States, Europe, and beyond.

Microsoft and Facebook designed MAREA to be interoperable with a variety of networking equipment. This new “open” design brings significant benefits for customers: lower costs and easier equipment upgrades which leads to faster growth in bandwidth rates since the system can evolve at the pace of optical technology innovation. This is critical to ensure the Microsoft Cloud continuously improves to provide the highest availability and performance customers need for their mission-critical workloads and data.

Microsoft and Facebook are working with Telxius, Telefónica’s telecommunications infrastructure company, building upon their longstanding experience in subsea cables on this innovative new system. Telxius will serve as the operator of the system and sell capacity as part of their wholesale infrastructure business.

As one of the largest cloud operators in the world, Microsoft has invested more than $15 billion (USD) in building a resilient cloud infrastructure and cloud services that are highly available and highly secure while lowering overall costs. Microsoft has now announced 32 Azure regions around the world with 24 generally available today – more than any other major cloud provider. This latest investment, together with Microsoft’s previously announced investments in global fiber assets including the NCP trans-Pacific subsea cable, is further proof of Microsoft’s commitment to empower every person and every organization on the planet to achieve more.