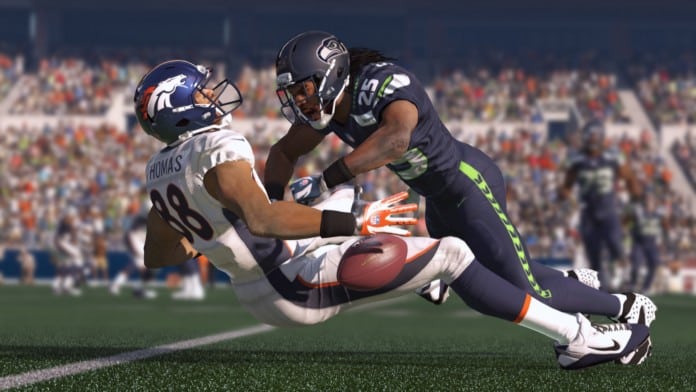 The latest Madden NFL installment is the hottest sports video game at the moment. Madden NLF 15 was released back in the summer of 2014, however, it continues to be a top seller in its genre category. It is the best-selling sports video game on Amazon.com for the entire 2014. Moreover, it ranks 28th on the retailer’s best sellers ranking in video games.

If you are a fan of the Madden NLF franchise or sports titles in general, you probably do not rush into buying every new installment, but rather skip a year or two. Well, that would be a mistake with Madden NFL 15, because the title features a number of refreshments and improvements. This edition of the game does not simply include a new team of player. It also offers a better defensive game, more camera angles, extra moves and revamped graphics, stadiums and animations. The result of that is a more dramatic and highly realistic gameplay.

One of the highlights about this Madden NFL installment is that fans are now able to call plays through a crowd-sourced engine for recommendation. It relies on date collection from millions of online games. In that way, it can give a top selection of plays in every different situation.

Madden NFL 15 is available on Xbox One, Xbox 360, PlayStation 4 and PlayStation 3 consoles. BestBuy.com offer the game for all of these four devices. If you are looking for bundles, you should head to the Microsoft Store and order the Xbox One Madden NFL 15 Bundle. It consists of an Xbox One console, a wireless controller and the latest Madden NFL title. Microsoft’s online store also offer the game in its Ultimate Edition for the Xbox One gaming console. Those, who can do with a used copy of the game, can get one from Amazon. The adrenaline rush is guaranteed!