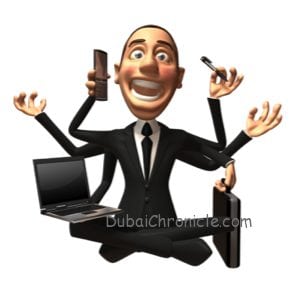 Are you checking your phone while working? Are you required to do several things at a time in the office? With the growth of mobile devices we have all become “multitaskers” more or less, especially at work when we’re expected to be always in our best shape and to be able to do everything. And while some claim multitasking helps them focus and get more work done, experts warn that it actually kills performance.

There is belief that multitasking is some sort of a special skill and that employers who manage several tasks at once are better than their colleagues.  However, experts say multitasking only works when for example you are clearing up your desk while listening to a voicemail, a conference call without your participation, or to podcasts. The key to successfully doing two or more things simultaneously is to do tasks that require different “channels” of mental functioning – visual, manual, auditory or language. But many people do several similar tasks at work, which isn’t beneficial at all, say scientists. A good example is your colleague who always takes his laptop on meetings. Finishing up a project or writing a letter while being on a meeting or a conference is a huge mistake – you will eventually lose track of what is being discussed around you, as you will be simply distracted.

Researchers from Stanford found out that people who consider themselves as frequent and great multitaskers are actually worse at multitasking than people who prefer doing a single thing at a time. And these frequent multitaskers perform worse at doing their job because they can’t focus on more than one thing. So filling up reports while on a meeting won’t be much efficient – you won’t be attentive and you will probably make errors.

Interestingly, multitasking also lowers the IQ, according to researchers at the University of London. Their study shows that multitaskers score as low on cognitive tasks as if they stayed up all night. The effect on men is even more impressive – when they multitask, their scores are similar to the result of an average 8-year-old child.

Long-term negative effects on the brain

According to new research from the University of Sussex, multitaskers have less brain density in the anterior cingulate cortex, a complex name for the area of the brain, responsible for cognitive and emotional control, and empathy. And these changes in the brain function are likely to be long-term.

These long-term effects on the brain damage emotional intelligence (EQ), which is critical to success at work, irrelevant from the field or position. TalentSmart says that EQis very important – around 90% of the best-performing individuals have “emotionally intelligent”.