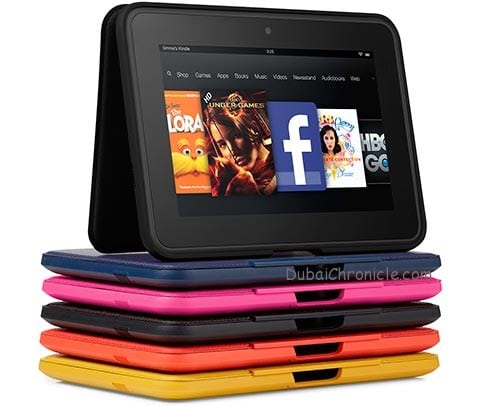 . Only today, customers can get it for $20 off its list price.

If you are planning to buy the latest Fire HD7 tablet, don’t wait until Black Friday. While older devices might get good discounts during the holiday sales, new-generation tablets won’t see promotions. However, today, November 19, Amazon offers customers $20 discount for the Fire HD7 tablet, so now it’s available for only $119. With a fast quod-core processor up to 1.5 GHz, 8GB of storage (there’s a version with 16 GB, as well), and beautiful 7-inch high definition touchscreen, it’s the best tablet in its class and price range. It’s great for the whole family, as it has great features such as free and unlimited cloud storage for all Amazon content, huge selection of movies, TV shows, books and songs, as well as Android apps and games, and many more. In addition, the tablet has a front and rear cameras, which are perfect for taking photos or capturing videos in 1080p HD or connecting with your friends via Skype.

Along with the Fire HD7, Amazon has also marked down its Kindle Fire HDX 7” Tablet, which has even better characteristics and typically sells for $199. Now customers can save $20 off its original price. It comes with the latest 4G technology and the new Fire OS 4, called “Sangria”. In addition, Amazon offers you to save $40 on the Fire HD, if you subscribe for Amazon Prime which costs $99. And you get all this with free two-day shipping.

Amazon has decided to discount its Fire HD 7 tablet in order to celebrate its top ranking for “Highest in Customer Satisfaction with Tablets” in J.D. Power 2014 U.S. Tablet Satisfaction Study Volume 2. Amazingly, the survey found that Apple’s iPad has lost its No. 1 spot to Amazon and its line of Fire tablets. Of the 1,000 points in total Amazon had 827 points, while the well-established iPads had 824, followed by Samsung, Asus and Acer tablets.