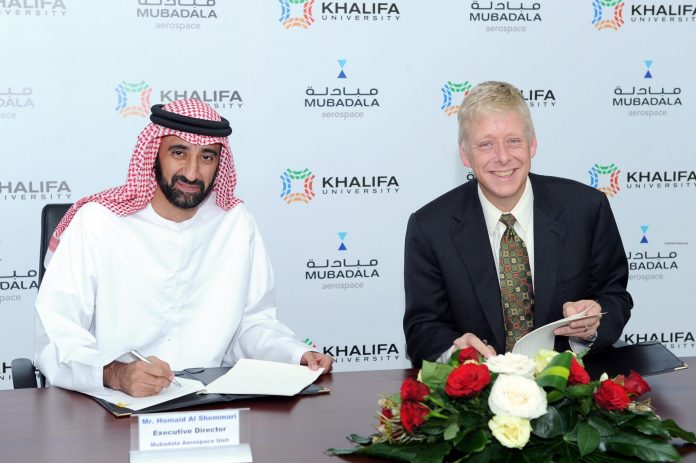 Mubadala to grow long-term role supplying as much as $2.5 billion in advanced composites and machined metals

Boeing and Mubadala Development Company (Mubadala) today announced a new strategic agreement that will increase the long-term role of Mubadala as a Tier 1 supplier to Boeing. Through their agreement, signed at the 2013 Dubai Airshow, Mubadala has the opportunity to supply as much as $2.5 billion in advanced composites and machined metals to Boeing commercial programs, including the 787 and 777X.

Boeing and Mubadala have also agreed to work together to develop pre-preg and carbon fiber manufacturing capabilities in the Emirate of Abu Dhabi. This will support the ongoing development of the aerostructures industry and create raw-materials capabilities in the United Arab Emirates.

This latest agreement advances the strong relationship between Boeing and Mubadala and reflects the UAE’s expanding role in aerospace industry manufacturing. As previously announced, Strata Manufacturing, a Mubadala subsidiary, is also positioned to be a supplier of the 787 Dreamliner vertical fin. Boeing and Mubadala remain committed to continue their close cooperation to develop Emirati aerospace capabilities.

“Boeing is pleased to expand our relationship with Mubadala, a company that is committed to creating globally competitive and strategic aerospace capabilities in the UAE,” said Ray Conner, Boeing Commercial Airplanes President and CEO. “We support our customers by leveraging the world’s talent and resources in ways that build a more capable, competitive supply chain for our products.”

Homaid Al Shemmari, Executive Director of Mubadala Aerospace, Communications Technology & Defense Services, said, “Today’s agreement further strengthens our relationship with Boeing, and provides an important platform as we continue to develop our role as a significant supplier to Boeing of composite aerostructures, and develop Strata into a major Tier 1 industry supplier.”

At the 2009 Dubai Airshow, Boeing and Mubadala signed a Strategic Framework Agreement to develop mutually beneficial initiatives in areas of strategic mutual alignment, including composites manufacturing and people development. At the 2011 Dubai Airshow, the companies announced that Strata Manufacturing would supply composite aerostructures to Boeing and defined a strategic roadmap whereby, through performance and competitiveness, Strata would become a Tier 1 supplier to Boeing. In 2012, Boeing and Mubadala announced that Strata would produce 777 empennage ribs and 787 vertical fin ribs and was positioned to build the vertical fin for the Dreamliner.