92 percent of consumers around the world say they trust earned media, such as recommendations from friends and family

The explosion of social networks and consumer-generated media over the last few years continues to have a significant impact on advertising as consumers’ reliance on word-of-mouth in the decision-making process – either from people they know or online consumers they don’t – has increased significantly.

According to Nielsen’s latest Global Trust in Advertising report, which surveyed more than 28,000 Internet respondents in 56 countries, 92 percent of consumers around the world say they trust earned media, such as recommendations from friends and family, above all other forms of advertising—an increase of 18 percent since 2007. Online consumer reviews are the second most trusted source of brand information and messaging, with 70 percent of global consumers surveyed online indicating they trust messages on this platform, an increase of 15 percent in four years.

The survey also showed that nearly six-in-10 global online consumers (58%) trust messages found on company websites, and half trust email messages that they signed up to receive. On the Web, four-in-10 respondents rely on ads served alongside search engine results, 36 percent trust online video advertisements, and one-third believe the messages in online banner ads—an increase of 27 percent since 2007. Sponsored ads on social networks, a new format included in the 2011 Nielsen survey, are credible among 36 percent of global respondents.

Display ads (video or banner) on mobile devices such as tablets and smartphones are trusted by one-third of global respondents, which is slightly higher than the reported consumer trust level of text ads on mobile phones (29%). While the reported consumer trust level in mobile phone advertising is still low, it increased 61 percent since 2007 and 21 percent since 2009.

When it comes to traditional, paid media, while nearly half of consumers around the world say they trust television (47%), magazine (47%) and newspaper ads (46%), confidence declined by 24 percent, 20 percent and 25 percent, respectively, between 2009 and 2011. Still, in 2011, overall global ad spend saw a seven percent increase over 2010, according to Nielsen’s most recent Global AdView Pulse. This growth in spend was driven by a 10 percent increase in television advertising. 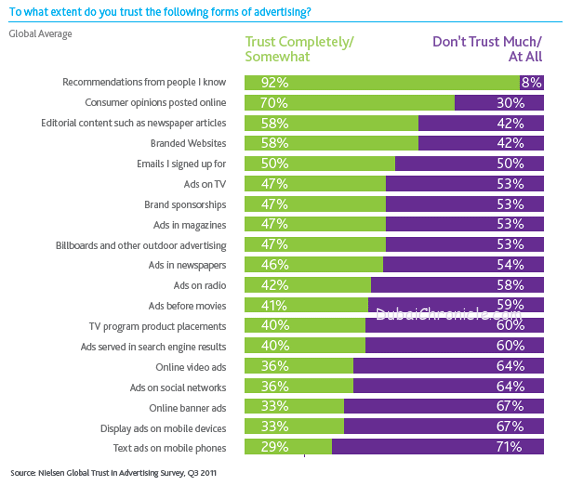