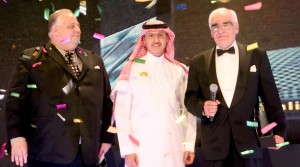 Ashraf Abu-Sharkh, Partner and UAE Entrepreneur Of The Year Leader, Ernst & Young, said: “We are proud to present this award to Sheikh Ahmed, who has been at the forefront of Dubai’s remarkable economic development. The phenomenal growth of Dubai’s aviation industry under his leadership is testimony to Sheikh Ahmed’s grand vision and foresight. We believe that the success story of The Emirates Group is one of the best examples of entrepreneurship in the world.”

Farouk K. Toukan, Executive Partner, CICON, was named Ernst & Young’s UAE Entrepreneur Of The Year 2011 by an independent panel of judges. He was chosen from a group of nine finalists, each a dynamic and gifted regional business leader. The award was presented at a gala dinner held in Dubai under the Patronage of HH Sheikh Maktoum Bin Mohammed Bin Rashid Al Maktoum, Deputy Ruler of Dubai.

Farouk K. Toukan was selected UAE Entrepreneur Of The Year 2011 by an independent panel of judges after an extensive process of evaluation, which included an analysis of the economic and social value added to the development of the UAE. The judging process was based on numerous criteria that included entrepreneurial spirit, financial performance, strategic direction, global impact and influence.

“We express our gratitude to HH Sheikh Maktoum Bin Mohammed Bin Rashid Al Maktoum, Deputy Ruler of Dubai, for providing his patronage to the UAE Entrepreneur Of The Year program. We congratulate Farouk on being named the 2011 UAE Entrepreneur Of The Year. This award is a testament to his innovation, personal effectiveness and integrity. He established CICON in Abu Dhabi in 1968.Since then, as one of the first suppliers of building materials to the construction industry, the company has held its pole position and evolved with the wider industry,” added Ashraf.

The Entrepreneur: Win a Million Dirhams

Entrepreneur of the Year 2011 launched in UAE