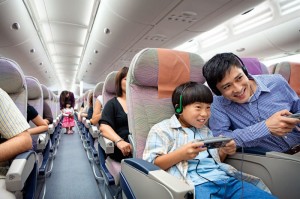 For the seventh year in a row, Emirates Airline’s ‘ice’ inflight entertainment system has been awarded the ‘World’s Best Airline Inflight Entertainment’ award at the 2011 Skytrax World Airline Awards. The awards are based on voting by over 18.8 million airline passengers from 100 different nationalities.

Inflight Entertainment (IFE) has become a key competitive benchmark for airlines worldwide. Emirates has maintained its industry-leading position by continuously investing in and expanding its entertainment offering; resulting in an incredible range of movies, television and music from around the world.

Emirates latest IFE system, ice Digital Widescreen (‘ice’ stands for information, communications and entertainment), offers a staggering choice of over 1200 channels of entertainment, including over 280 movies from around the world, hundreds of TV choices and thousands of music tracks from contemporary to classical.

As well as investing in the latest entertainment content and newest systems, Emirates has recently finished upgrading the hardware on its existing A330-200 and A340-300 fleets to a new digital IFE system; bringing ice to every seat in Emirates First Class and Emirates Business Class – a considerable investment in equipment at time when many airlines are easing back on significant product improvements. Furthermore, Emirates now has over 90 aircraft equipped with AeroMobile, which allows mobile phone use inflight, and will soon roll out A380 aircraft equipped with WiFi internet connection.

“As a global airline serving 113 destinations on five continents, our passengers are as diverse and unique as our routes. Emirates strives to make our service the most comfortable and entertaining in the world. This year’s Skytrax ‘World’s Best Airline Inflight Entertainment’ award once again underlines our relentless commitment to providing the best inflight entertainment in the air – offering more content, in more languages and ultimately more choice, than ever before,” said Patrick Brannelly, Emirates’ Vice President Corporate Communications Product. “We are proud to have our efforts recognised once again and we can assure our passengers that we won’t be resting on our laurels at all; we’ll be working harder than ever to make sure that our passengers continue to have the best entertainment experience in the air.”

“Emirates seems to have a very firm grip on this title, having been named the winner of world’s Best Airline Inflight Entertainment Award for many successive years,” said Edward Plaisted, CEO of Skytrax. “With the increased level of competition amongst airlines to deliver the best standards of inflight entertainment, it is an even greater achievement for Emirates that they can stay at the No 1 spot again in 2011.”

A great example of what passengers can experience from inflight entertainment on Emirates is the incredible August line-up; featuring 50 newly-acquired movies from Hollywood, Bollywood and beyond. Emirates will be the first airline showing of Pirates of the Caribbean: On Stranger Tides, which complements an extensive film library available on ice. Families travelling with children will be spoilt for choice in August as ice will offer over 25 kids movies; including up to 18 Disney Classics and 10 new release movies for younger viewers. Children can also enjoy up to 30 hours of TV programmes ranging from pre-school favourites, the Wiggles, to BBC Cbeebies sensation Rastamouse and Cartoon Network hits.