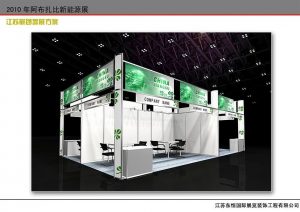 More than 40 world leading renewable energy companies from China have confirmed their participation in the World Future Energy Summit which is now in its third year and will be held from 18-21 January 2010, in Abu Dhabi, with a particularly strong level of participation from the solar energy sector. The Chinese pavilion has already grown to more than 1,000 square meters

Leading companies and organisations from all across China, from Beijing, Shanghai, and Changzhou, to Wuxi, Ningbo, and Hangzhou will be participating in the World Future Energy Summit.Â  Some of Chinaâ€™s leading companies are taking part in the Summit including Suntech Power, Yingli Green Energy Holding, and China Sunergy, among other international leaders.

There is a particularly strong presence of companies from Jiangsu Province, where solar power is a pillar of the economy.Â  Suntech and China Sunergy are both located in Jiangsu.Â  Approximately half of the Chinese companies participating are from Jiangsu province.

Dr. Zhengrong Shi, Suntechâ€™s Chairman and CEO, will take part in a discussion on International Policy and Climate Change Action Plans during the summit in Abu Dhabi in January.Â  Suntech, a NYSE listed company with a market capitalisation of close to $3 billion, is the worldâ€™s largest producer of crystalline silicon solar panels and has delivered solar energy products to more than 80 countries over the past eight years.

The China Greentech Report1, recently issued by the China Greentech Initiative, a partnership of more than 80 of the worldâ€™s leading companies and organizations, projects that the investment by the Chinese government in its â€œgreentechâ€ industry will drive private sector investment that could create a national market worth up to US$1 trillion annually.

Such significant investment and government commitment has led to China playing a significant role in the exhibition at the World Future Energy Summit.Â  The summit will provide a platform for Chinese leaders in renewable energy to collaborate with counterparts from across the globe to drive forward solutions to the energy challenges the world is facing.

About WFES:
The 3rd edition of the World Future Energy Summit will be held from 18-21 January 2010, hosted by MASDAR, at the Abu Dhabi National Exhibition Centre under the patronage of HH General Sheikh Mohammed Bin Zayed Al Nahyan, Crown Prince of Abu Dhabi and Deputy Supreme Commander of the UAE Armed Forces

World Leaders, Policy Makers, Experts and Investors from 100 countries will meet in Abu Dhabi to identify real solutions for today’s climate change and energy challenges. Over 600 exhibitors from 50 countries will be exhibiting at the World Future Energy and Environment Exhibitions on a total space of 40,000sqm offering an unrivalled business and networking opportunities to over 20,000 attendees expected to visit the summit and the exhibition.

For more information on the programme or to register, visit www.worldfutureenergysummit.com

DB Climate Change Advisors group (DBCCA) is the institutional and alternatives investment management business of Deutsche Asset Management, managing assets of institutional investors and high net worth individuals. DeAM is one of the leading climate change investors in the world, with approximately $4 billion under management as of March 2009.Â  With a world-class in-house research team focusing on this theme, DeAM is an investment industry thought-leader on a broad range of climate change dynamics.

In June 2009, DBCCA launched the worldâ€™s first scientifically valid, real-time carbon counter, a nearly 70-foot-tall digital billboard displaying the running total of long-lived greenhouse gases in the atmosphere in New York.Â  The Carbon Counter Number is available 24 hours a day at http://www.know-the-number.com and updates are available at ttp://twitter.com/knowthenumber