The Dubai International Financial Centre Authority today announced the release of the updated version of its â€˜Guide to Islamic Finance in or from the DIFCâ€™.

Apart from incorporating the new landmarks in the evolution of its model Islamic insurance regulatory framework and operating practises, the latest publication also takes into account the changing overall scenario as a result of the ongoing financial crisis that is gripping the world.

At the same time, the publication retains and expands on its original aim of assisting those parties from within the region and outside, who are interested in learning about the rapidly expanding world of Islamic finance.

The publication provides a summary of the underlying concepts in Islamic finance and examines the issues facing the Islamic financial services industry, both in DIFC and beyond; now and in the future.

The Islamic Financial services industry is growing at a phenomenal rate. What emerged as a niche industry has now pervaded almost every major financial market in the world. Markets are seeking to introduce Islamic products under various labels like Islamic Finance, Shariah-compliant Finance, or even Alternative Finance, but whatever title is used, it is without doubt one of the fastest growing financial sectors in the world. Most global banks either have a subsidiary or a division dedicated to Islamic Finance.

Abdulla Al Awar, Chief Executive Officer of DIFC Authority, pointed out that the DIFC had identified Islamic Finance as one of its major pillars even before it became globally popular. â€œSince then the DIFC has successfully worked towards becoming a hub for Shariah-compliant finance.

â€œPerhaps now is the opportunity for Islamic Finance to come out from the shadows of conventional finance and provide financial products in line with Shariah to an investor base that is currently unsatisfied and unsure of the conventional financial system,â€ he said.
There are many factors for this phenomenon. Many conventional forms of banking and insurance have been prohibited or restricted in the Islamic World on the grounds that they contravene the tenets of Islam.

But, in recent years, there has been a dramatic growth in Islamic or Shariah-compliant financial products, reflecting a number of trends including changes in Islamic law such as the approval in 1985 by the Grand Counsel of Islamic scholars of the Takaful system as the alternative form of insurance written in compliance with Islamic Shariah and the emergence of an international market in Sukuk (Shariah-compliant) bonds.

Other factors are economic development giving rise to infrastructure and other projects which require Shariah-compliant forms of financing, rising incomes among the Arab population resulting in the need for Islamic consumer financial products such as insurance, mortgages, pension plans and investment funds, and changing demographics resulting in the growing need for pensions and other retirement savings products.

The publication points out that the total size of the Islamic Banking industry is currently estimated to be between US $800 billion to $1trillion, and is estimated to have a global potential of $4 trillion. It is growing at 15-20 per cent per annum and within the next 8-10 years Islamic banking industry is projected to capture half of the savings of the worldâ€™s 1.6 billion Muslims.

Currently, market penetration amounts to an estimated 20 per cent of the Arab population. This figure is expected to rise dramatically and it is expected that within the next decade, 50 to 60 per cent of the total savings of the world’s 1.2 billion Muslims will be in the form of Shariah compliant products.

More interestingly, as conventional banking faces troubled times, Islamic banking, which is asset-backed as opposed to debt-based, offers a viable alternative and is becoming increasingly popular in global financial capitals such as London, which ranks second after Dubai in terms of the number of listed sukuks.

The publication says assets under management in Islamic Funds are estimated to be between $50-70 billion and the total value of sukuks issued is valued at more than $88 billion, of which $13 billion is listed on NADAQ Dubai.

Hari Bhambra, Senior Partner, Praesidium, said: â€œIslamic Financial Institutions based in the DIFC are clearly ready to respond to this opportunity and this publication provides information on the manner in which Islamic Finance can be offered in or from the DIFC.

â€œPraesidium has developed this publication with the DIFC Authority to assist those parties interested in learning about Islamic finance generally and gaining an understanding of the operating environment of the DIFC,â€ he said.

Bhambra said the publication provides a summary of the underlying concepts in Islamic finance and examines the issues facing the Islamic financial services industry, both in DIFC and beyond; now and in the future.

It also sets out the regulatory environment developed by the Dubai Financial Services Authority (DFSA) for Islamic finance and the scope for the application of such requirements to new product offerings, such as Shariah-compliant REITs.

Some Islamic Finance Milestones @ The DIFC up to 2008

August 2006: MoU between DFSA and Securities Commission Malaysia which also announced the launch of the initiative to facilitate cross-border flows of Islamic Finance between DIFC and Malaysia.

October 2006: NASDAQ Dubai becomes the worldâ€™s largest exchange for Sukuk, with a total value of US$ 4.11 billion.

March 2007: The Mutual Recognition Model was launched between the DFSA and SC Malaysia to facilitate the cross border flows of Islamic Finance between DIFC and Malaysia.
DFSA enters into a MoU with Bank Negara Malaysia to further develop Islamic Financial Markets.
Cass Business School begins delivering the world’s first new Executive
MBA from the DIFC specializing in Islamic Finance and Energy

June 2007: DIFCA, through its investment arm, DIFC Investments, issues a US$ 1.25 billion Sukuk, the largest-rated and the largest Straight Sukuk to be launched out of the region.
The total value of Sukuk listed on NASDAQ Dubai topped US$ 10.43 billion as of 18 June 2007, the highest in any exchange worldwide. 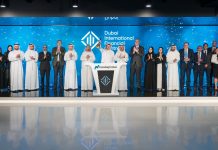