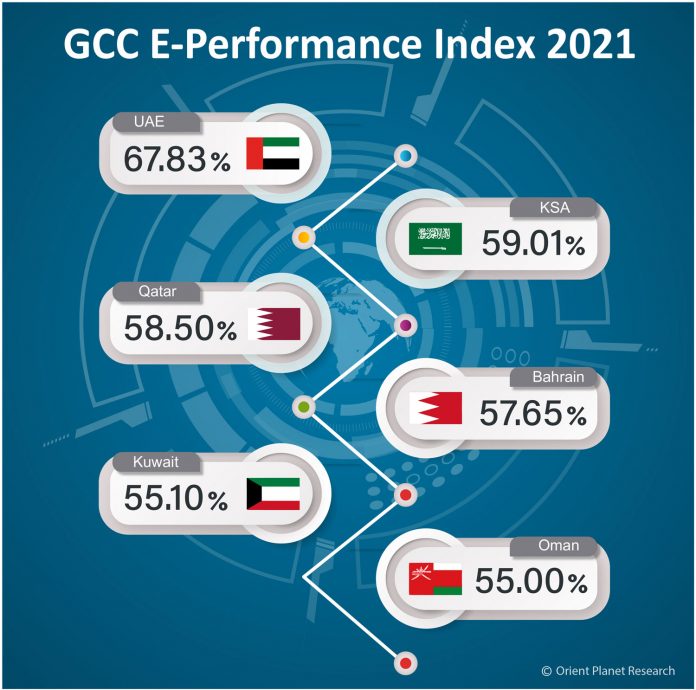 Results of the new GCC E-Performance Index 2021 revealed that the six Gulf countries are progressing steadily in their digital transformation with varying degrees of development. The 2021 report was published by Orient Planet Research (OPR), the market research unit of Orient Planet Group (OPG), in partnership with information and communications technology (ICT) expert and independent researcher Abdul Kader Al Kamli.

Nidal Abou Zaki, Managing Director, OPG, said: “The GCC E-Performance Index 2021 reflects the member states’ steady efforts to achieve global leadership and competitiveness in today’s digital era. Each country is advancing at its own pace, utilizing a coordinated approach to digital innovations in line with its economic and social development agendas. Heavy investments in technological infrastructures and next-generation tools such as artificial intelligence (AI), the Internet of Things (IoT) and robotics are also being made across the region to help accelerate the countries’ respective economic diversification policies. Such investments are crucial to significantly reinforce their non-oil sectors and fast-track their sustainable development goals.”

Abou Zaki added: “We can gain valuable insights from the GCC E-Performance Index 2021 concerning each country’s commitment to transition to the digital era, its progress and the opportunities arising from its digitalization journey. The insights will help decision-makers, policymakers, government leaders and business executives to make the necessary actions to step up their digital transition according to their growth strategies. Their approaches should be designed in a way that will make them even more competitive in today’s highly connected and technology-driven society.”

Al Kamli, on the other hand, stated: “As shown by the GCC E-Performance Index, the UAE continues to perform strongly across all indicators. This comes as no surprise given its intensified digitalization initiatives that are comparable with the rest of the world. We can expect to see more from the UAE in terms of its digital innovation efforts to sustain its gains and cement its global standing. But other GCC member states are also expected to up their game to future-proof themselves and better prepare for the changes that will come with the unstoppable 4th Industrial Revolution. Overall, in the Arab world, the GCC will remain at the forefront of the region’s digital journey.”

The report pointed out the link between better scores and countries with advanced telecommunication infrastructure.  Across the GCC, telecommunication-related investments are rising with further growth projections on the Gulf states’ information and communications technology (ICT) spending.

In the UAE, the government’s ICT expenditure is forecasted to witness a compound annual growth rate (CAGR) of 8 per cent during 2019-2024 as per the findings of GlobalData. During 2019-2024, the same data and analytics company also predicted an increase in the ICT spending of Qatar at 9.2 per cent CAGR; Bahrain, 8.6 per cent CAGR; and Oman, 11.3 per cent CAGR.  The scene is no different in their neighboring Saudi Arabia, where the overall ICT spending this 2021 is projected to reach USD 32.9 billion, up 1.5 per cent in 2020, according to an International Data Corporation (IDC) study.

The World Economic Forum’s GCI is defined as the yearly assessment of the drivers of productivity and long-term economic growth. Portulans Institute’s NRI positions 134 economies accordingly based on their performance across 60 variables, while GAR of the International Development Research Centre (IDRC) and the Centre de recherches pour le développement international (CRDI) studies the ability of each country to integrate AI into public service.

GII presents data on innovation and is co-published by Cornell University, INSEAD and the World Intellectual Property Organization (WIPO). Lastly, EGDI, as per the UN, explores how digital government can facilitate integrated policies and services across the 193 UN member states.

To compute the average of each GCC country per indicator, the research team behind the GCC E-Performance Index adjusted all scores to follow a unified scale of 0 to 100, allowing for ease of comparison. This methodology was adopted given that not all indicators utilize the same scale. The countries were then sorted according to the calculated average, beginning with the highest value.

The report presented both the regional and global rankings of each member state per indicator. Regionally, the UAE scored 85.55 on the GCC E-Performance Index’s EGDI indicator and 75 on the GCI indicator. Its scores under NRI, GAR, GII were 64.42, 72.40 and 41.79, respectively.