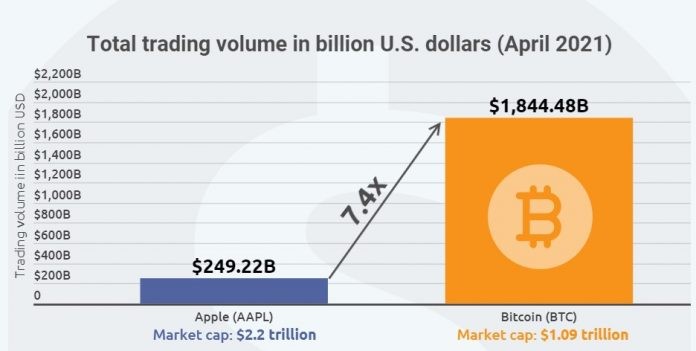 Elsewhere, the lowest bitcoin trading volume was recorded on April 29 at $46.09 billion, while Apple’s lowest was on April 27 at $8.87 billion.

The electronic giant also lags behind bitcoin in the 30-day average trading volume by at least 5.1 times less. Bitcoin trading volume was at $61.48 billion for the monthly average, while Apple stood at $11.87 billion.

Although both bitcoin and Apple are from different asset classes, the trading volume highlights how the digital asset compares to the most valuable company in the world. The digital currency has attained the trading volume milestone despite experiencing several process corrections and an all-time high in April.

The report highlights the progress made by bitcoin to beat Apple on the trading volume metric. According to the research report:

“Bitcoin’s significant trading volume against Apple shows the digital currency is now competing with established traditional asset classes. As a result, the asset is no longer being sidelined, especially with the influx of institutional investors into the sector.”

Bitcoin’s current position in the financial world comes following the entry of institutional investors like Tesla, PayPal, and Visa, who are investing in bitcoin or supporting the asset’s transaction.