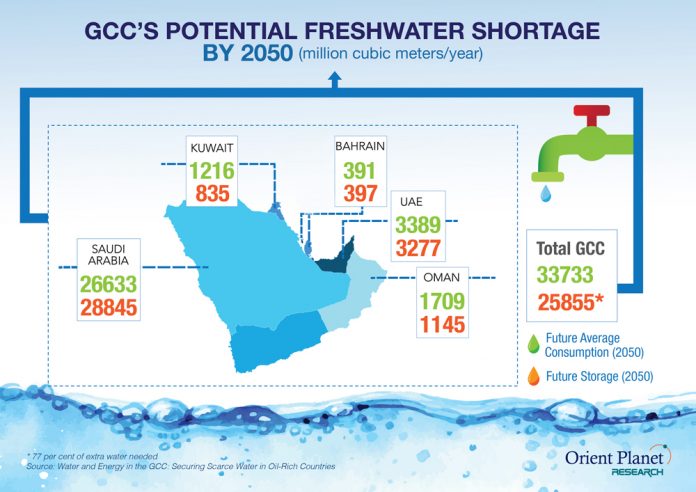 The GCC region remains one of the highest consumers of water in the world as demand surges simultaneous with its booming population and steady socio-economic growth, according to a report titled ‘Water Management and Sustainability in the Gulf Cooperation Council: Addressing Scarcity and Consumption in the Region’ recently released by Orient Planet Research (OPR), an Orient Planet Group venture.

The OPR report examined various fundamentals affecting the regional water industry in light of uncertainties concerning the growing gap between water demand and supply in the six GCC member states. According to the report, a look at various sources has revealed that freshwater supply shortage could be on the horizon if the current trend of water consumption level in the region continues.

“There are more than 50 million inhabitants across the GCC today and the figures could increase by approximately 14 million by 2050. Given these projections, it is expected that the water demand is only going to climb. The water-intensive lifestyle that is prevalent in the Gulf countries as well as their steady economic progress are going to further widen the demand-supply gap in the future,” said Nidal Abou Zaki, Managing Director, Orient Planet Group.

The OPR report has found an industry study predicting that the GCC’s future average consumption will hit 33,733 million cubic meters by 2050. With the region’s projected future storage of only 25,855 million cubic meters, the GCC, said the same study, will need an additional 77 percent water to meet the requirements of its populations 30 years from now.

Other industry estimates reveal an even higher number, putting the GCC’s annual water demand at over 50 billion cubic meters by 2030. The region’s current population growth rates, water management approaches, and water use practices and consumption patterns have all been taken into account in computing the projected figure.

The OPR report has also determined that low levels of water reuse and recycling are putting intense pressure on the region’s water industry apart from the GCC’s growing population and economic strength.

Facing scarcity of fresh water – exacerbated by irregular rainfall, high evaporation rate, and the climate change impact –the GCC inhabitants rely on groundwater for their drinking water and other daily needs. Desalination and wastewater treatment are also the GCC’s main water sources. During the past decade, GCC governments have invested USD 76 billion in several water projects, according to aMEED Projects research, while a number of wastewater treatment plants have been set up for irrigating parks, gardens, and landscapes.

While desalination provides the needed supply, the OPR report points to the fact that the process is costly and energy-intensive and contributes to environmental degradation. The report said that the cost of operating and maintaining desalination plants ranges from USD 1,000 to USD 2,000 per cubic meter. Marine biodiversity is at risk as well due to the environmental effects of the operations of these facilities.

Considering the risks, GCC governments have been seeking and implementing more sustainablealternative sources of water to reduce their heavy reliance on desalination plants that are known for their financial and environmental impacts.

Abou Zaki said: “Desalination, just like other industrial processes, has ecological hazards that need to be understood, reduced, and totally eradicated. GCC countries are fully aware of its impact, as such, they have been looking for more sustainable solutions. These include desalination using solar energy and other eco-friendly water projects. We expect to see the governments doubling their current efforts to catch up with the requirements of the region’s growing population.”

All GCC governments have ongoing and future plans for water projects. GCC countries have been investing billions of dollars in their water sectors, specifically to improve desalination technologies or solar-powered plants, among others. Other initiatives include groundwater treatment; energy-efficient desalination process; potable and industrial water transmission and distribution; and waste-water collection, treatment, and reuse.

The use of advanced water technologies has become a critical development in the GCC territories, in addition to the government sector adopting other strategies and programs that will help solve the compelling issue of water shortage. Relevant programs adopted in the UAE, for instance, include the Water Security Strategy 2036, the Dubai Integrated Water Resource Management Strategy 2030, and the Demand Side Management strategy.

The OPR report outlines other initiatives to help accelerate the region’s path towards sustainability, including increased public awareness, extension of support for innovations and inventions, government policies implementation, and deployment of effective water management programs.

Support for innovations and inventions will likely produce smart solutions to the water shortage problem. Current technology must be furthered developed with a focus on eliminating adverse effects and improving on existing beneﬁts. Advanced technology will safeguard the resource for the coming years.

The OPR report has noted as well that the lifestyle of certain Arab countries – and particularly GCC countries – is wasteful, in part due to water subsidies. To avoid waste, Arab countries have been ramping up their efforts to recycle all wastewater – a cheaper and more environmentally friendly source of freshwater. In the upkeep of gardens, meantime, water-efficient irrigation systems can be utilized to minimize water use. The household can also collect water from rain and check for leaks in the pipes to prevent dripping.

The OPR report has maintained that GCC countries can efficiently address water shortage if policies encouraging efficient water management are implemented. With the right policies and effective execution of water conservation programs, coming up with effective solutions to water scarcity is likely. Solutions, the report said, can take the form of renewable energy-driven desalination technologies, compensation measures, and the installation and use of renewable energy in other localities or other activities.