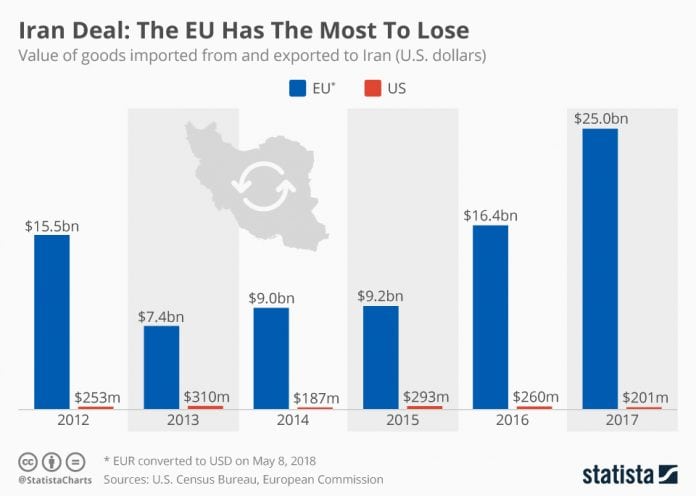 Europe is on edge ahead of Donald Trump announcing whether the U.S. will withdraw from the Iran nuclear deal. European companies have enjoyed success developing and strengthening commercial ties with Iran since the deal was inked in 2015. In exchange for sanction relief, Tehran agreed to limit uranium enrichment activities and eliminate its stockpiles. That saw European companies flock to do business in Iran, resulting in a mini-investment boom. Back in 2015, the value of trade in both directions was $9.2 billion and that increased sharply to $16.4 billion in 2016 after the deal was signed. Last year, the impressive pace of growth continued, reaching $25 billion.

European companies enjoying success in Iran include French company Total who are involved in the development of a gas field in the southern part of the country, along with Royal Dutch Shell who have invested in the Iranian energy industry. Airbus is another well-known European company involved in replacing Iran’s outdated and dangerous fleet of airliners. Renault also signed a lucrative deal last year worth $780 million which will include a production plant capable of producing 150,000 vehicles every year.

As European companies moved to exploit an open and growing market, U.S. companies struggled to get involved under a cloud of political uncertainty. One notable example of this is Boeing who agreed a slow-walking deal to supply Iranian airlines with modern aircraft. The future of that deal remains uncertain due to the threat of the nuclear deal collapsing and the company still hasn’t delivered a single aircraft to an Iranian customer. By comparison, Airbus has already delivered two A330-200s and a single A321. In 2017, the value of U.S./Iranian imports and exports only amounted to just over $200 million, miniscule compared to the flow of goods between Brussels and Tehran. Due to the negative rhetoric emanating from Washington, the EU has scrambled to protect its business interests in Iran. If Trump does reintroduce sanctions, the EU has developed a range of countermeasures including non-dollar denominated finance lines and an EU blocking statute which was developed in the 1990s but never used. Most experts believe any European response would be largely symbolic rather than effective. 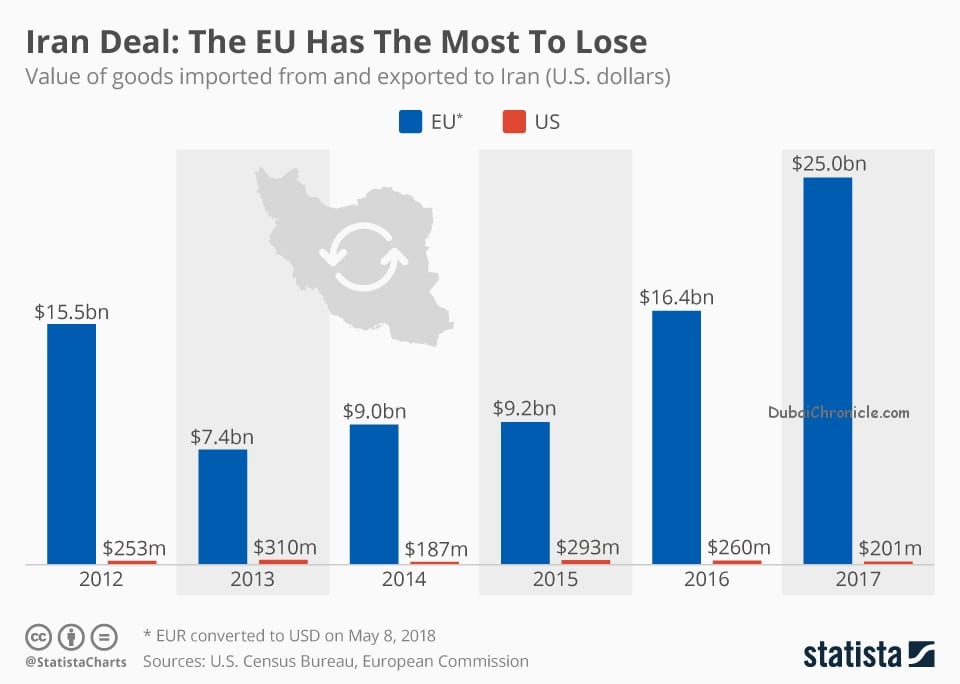