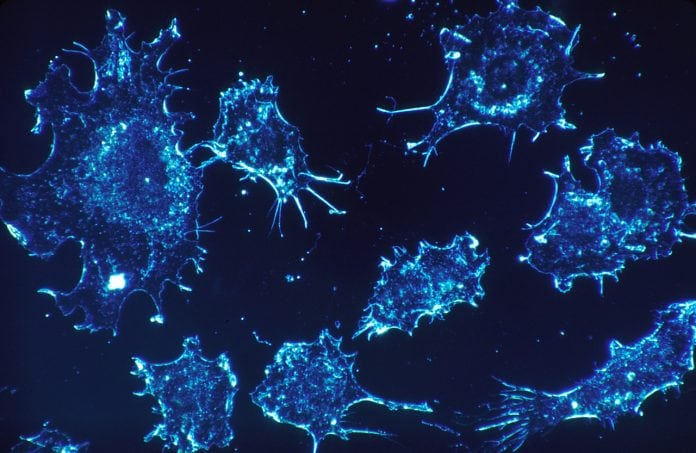 The remains of tumor cells killed by chemotherapy or other cancer treatments can actually stimulate tumor growth by inducing an inflammatory reaction. A study by researchers from Harvard Medical School and the Institute of Systems Biology, which will be published November 30 in The Journal of Experimental Medicine reveals that a family of molecules called resolvins can suppress this unwanted inflammatory response, suggesting new ways to enhance the effectiveness of existing cancer therapies.

Conventional, radiation- and drug-based cancer therapies aim to kill as many tumor cells as possible, but the debris left behind by dead and dying cancer cells can stimulate the production of proinflammatory cytokines, signaling molecules that are known to promote tumor growth. “Dead and dying tumor cells are an underappreciated component of the tumor microenvironment that may promote tumor progression,” explains Prof. Charles N. Serhan from Brigham and Women’s Hospital, Harvard Medical School.

The researchers therefore decided to investigate whether tumor cell debris can stimulate tumor growth. The research team was led by Mark Kieran from the Dana-Farber Cancer Institute and Boston Children’s Hospital, Harvard Medical School, Sui Huang from the Institute of Systems Biology in Seattle, and Dipak Panigrahy from the Beth Israel Deaconess Medical Center, Harvard Medical School. Megan Sulciner is the paper’s lead author along with co-lead authors Molly Gilligan and Dayna Mudge.

Sulciner et al. began by killing laboratory-cultured cancer cells with a variety of cytotoxic or targeted drugs and found that the resulting debris stimulated tumor formation when co-injected into mice with a small number of living cancer cells unable to initiate tumor growth on their own. Similarly, treating mice with the chemotherapy drugs cisplatin and vincristine generated tumor cell debris in vivo that enhanced the ability of surviving cancer cells to form tumors.

“Cytotoxic cancer treatment designed to kill tumor cells may be a double-edged sword that directly contributes to tumor progression and relapse because tumor cell debris stimulates the survival and growth of living tumor cells,” Panigrahy says.

The researchers discovered that tumor cell debris promotes tumor growth because a lipid called phosphatidylserine, which is exposed on the surface of dead and dying cells, stimulates the production of proinflammatory cytokines by immune cells known as macrophages.

“We reasoned that if drug-generated debris promotes tumor growth, clearance of debris may mitigate this effect,” explains Kieran. “Resolvins are a family of endogenous lipid-derived mediators that stimulate the resolution of inflammation by countering proinflammatory cytokines and increasing the uptake of cell debris into macrophages.”

“While generation of tumor cell debris throughout treatment may explain an inherent therapeutic limit to conventional cancer therapies, stimulating the clearance of such debris via specialized pro-resolving mediators, such as resolvins, represents a novel approach to preventing tumor growth and recurrence,” Serhan adds.