“What we found is that when parents are using constructive conflict management, the children feel less insecure about their family climate, and when at least one parent argues destructively, there are some levels of insecurity about the family relationships,” Kopystynska said.

“There is often a belief out there that if you are a low-income family, you probably have a lot of dysfunction, but over 50 percent of the couples we looked at were arguing constructively,” she said. “Considering all the stressors they’re dealing with, the majority of them still have a good, functional relationship, at least when it comes to conflict.”

The fact that the group in which both parents were arguing in destructive ways was so small might help explain one surprising finding of Kopystynska’s study — that emotional insecurity levels were lowest for children of these parents. Also contributing to that finding could be the fact that those couples may have broken up and physically separated from each other by the time the data was collected, meaning that children may not have been as directly exposed to their parents’ interactions, she said.

“Parents who were in the concordant destructive group were less likely to stay together, so they were probably not in the same home, so children were probably not exposed to that interparental conflict,” said Kopystynska, whose co-authors on the paper were UA faculty members Melissa Barnett and Melissa Curran, along with Katherine Paschall of the University of Texas, Austin.

In general, it’s important for parents to be aware of how they interact with each other, and remember that conflict shouldn’t necessarily be avoided but handled in a way that makes a child feel less threatened.

“Not all conflict is bad — it’s about how you manage it,” Kopystynska said. “Given that children are going to encounter conflict out there in the real world, exposure to some conflict can be beneficial. However, it’s really how parents handle that conflict that sets the tone for how safe children feel, and may further promote similar conflict management behaviors for when children are confronted with conflict of their own.” 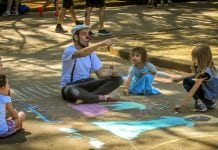 Here’s Why You Should Get Your Children Play Outside