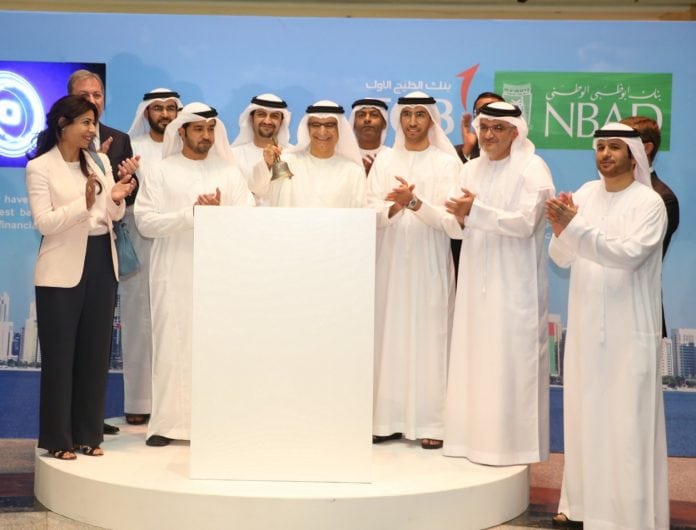 Reflecting the new bank’s deep roots and experience in the region, its Board of Directors has announced that the combined bank will be named “First Abu Dhabi Bank”, after attaining regulatory approvals and following the General Assembly Meeting that will be held at a later stage to approve the name. The new bank is now the UAE’s largest bank and one of the largest in the MENA region with total assets in excess of AED 670 billion (or $180 billion).

The trading of the new shares was marked by a launch ceremony held at ADX, where Group CEO Mr. Abdulhamid Saeed rang the opening bell. The event was attended by a number of the bank’s Board members and ADX’s senior leadership team.

Commenting on the launch, His Highness Sheikh Tahnoon Bin Zayed Al Nahyan, Chairman of the new bank, said: “As these two successful Abu Dhabi institutions unite to form one stronger and combined bank, today marks the start of another historic chapter in the story of the UAE. Embodying the UAE’s vision for growth and prosperity, we are confident that, “First Abu Dhabi Bank” will create new opportunities for our nation and support the growth ambitions of our shareholders, customers and employees, around the world.”

Abdulhamid Saeed, Group CEO of the new combined bank, said: “This is a transformational moment for Abu Dhabi, the region and beyond and is an extension of the legacy of both banks, which spans over a period of 50 years. I am remarkably proud to announce the successful completion of the merger of FGB and NBAD, which have combined their strengths to create the UAE’s largest bank and one of the world’s most prominent financial institutions. The bank has Capital of AED 10.9 billion, Total Assets in excess of AED 670 billion, Shareholders’ Equity of AED 98 billion and a Market Capitilisation of around AED 111 billion. As one stronger and larger bank, we will have the financial strength, expertise and international connectivity to put our customers first through an expanded range of products, services and solutions, drive strong profitability and deliver significant value for shareholders. The ringing of this bell today signals the start of a new journey to grow stronger – for our nation, our customers, our employees and our communities.”

To add, Chief Executive of ADX, Rashed Al Balooshi, stated: “The merger between FGB and NBAD is a new turning point in terms of establishing the largest banking entity in the UAE and one of the largest in the MENA region. The start of trading on the shares of the new bank should reflect positively on the overall trading on the Exchange during the coming period and should attract more investors, whether local or foreign, individuals or institutional. ADX has completed all procedures related to the register of shareholders in the new banking entity in a timely and efficient manner based on the mechanism under which the merger took place.”

Combining talent from both organisations, the bank announced a strong and experienced leadership team, to successfully execute its strategic agenda and maximise value for customers and shareholders across the business.

Under the guidance of CEO, Abdulhamid Saeed and supported by Deputy CEO and Acting Group Head of Corporate and Investment Banking, André Sayegh, senior management includes:

The new combined bank’s Board of Directors has decided on the direction of the bank in the coming period and key priorities have been established in line with the vision and growth ambitions of Abu Dhabi and the UAE, which will form the guiding principles for the leadership team.

Commenting on the strategic direction, Abdulhamid Saeed said: “We are now officially embarking on a new era, building on the respective legacies that each of the two banks have developed over the years, and working towards creating new milestones for the UAE and beyond. The bank’s strategy will be focused on establishing itself as a financial services leader that puts its customers first, delivers top shareholder value and drives individual and institutional prosperity.”

Abdulhamid continued: “Our exceptionally strong consumer franchise has the scale and expertise to establish “First Abu Dhabi Bank”, as the dominant banking player in the UAE, providing the most extensive range of innovative products, services and technology in the region which will enable us to lead in digitalisation and customised banking experiences. We are also focused on becoming the regional wealth advisor of choice for our customers”.

The new bank aims to further strengthen its partnership with its Corporate and Investment Banking clients, across a variety of products and across geographies. With its global network across 19 countries, the bank will strengthen and facilitate the trade flows and financial links between the UAE and its trading partners.

Since the announcement of the FGB and NBAD merger on 3 July, 2016, the integration process has been running smoothly and according to the timelines set.