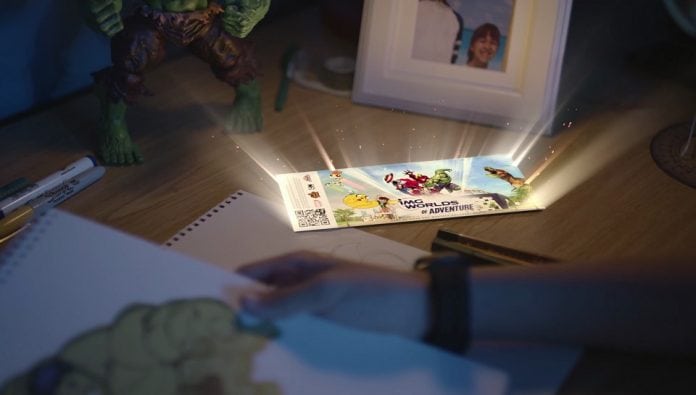 Zombies, dinosaur chases, flights through Dubai with Marvel’s Iron Man, audiences with the Hulk, adventures with the Powerpuff Girls and other Cartoon Network favorites, are all part of a day out at IMG Worlds of Adventure. It’s little surprise that the world’s largest indoor theme park brings these adventures to life in this VFX and CGI-heavy extravaganza. The action-packed commercial tells the story of a boy and his family’s imagination brought to life through the excitement and anticipation of visiting the theme park, along with the help of a magical ticket.

NDIGITEC has long been the region’s leading supplier to the brand owners, media and graphic arts industryand its Premedia competency took on the challenge to develop this ambitious project incorporating a range of global brands and IP’s. “The film is by far the most VFX heavy and advanced CGI-based piece of filmmaking to come from this region. I am hearing from people all over the world who have seen the TVC and love it” says producer Daniel Sheridan.

The campaign saw a global reach, broadcasting on regional television outlets such as MBC and CN (Cartoon Network), a 20-week run in all major UAE cinemas, and it entertained passengers around the globe on Emirates Airline’s ICE network.

“When we first pitched our treatment, the client was blown away at the creativity, attention to brand, and our ability to deliver such high-quality content” says Executive Producer Nathan Ornick. “In this region, there are talented agencies, film production companies and specialized post-production companies, but when it comes to a single, integrated solutions provider for content from concept to color-correction, NDigitec is by far the best.”

The 82-second spot was an incredible production challenge, with turnaround in less than 9 weeks. NDigitec developed the script with its internal creative team which required four weeks of preproduction. The film was shot over two days in Dubai on both physical sets and green screen. NDigitec’s postproduction and CGI team then dedicated over forty artists to create the spot in only five weeks of post, including 3D animation of dinosaurs and Marvel superheroes, 2D animation, 3D set replacements, and physical effects.

“Every shot is a VFX shot” says VFX supervisor Eyad Arabi. “This production really pushed things to the limit. Working with global brands such as Marvel and CN was a great privilege, and collaborating with their creative departments was inspiring. We got to create the story where many of these epic characters come to Dubai for the very first time.”

Developing the film to appeal to the diverse concerns of each major IP required extreme attention to detail. For example, the Marvel characters of Iron Man and the Hulk are all from one art guideline set called Evergreen. Marvel provides detailed references and guidelines but all the assets had to be developed, built and animated from scratch by NDigitec.

“These kinds of projects are the reason many of us got into creating animation and VFX in the first place” adds Arabi.