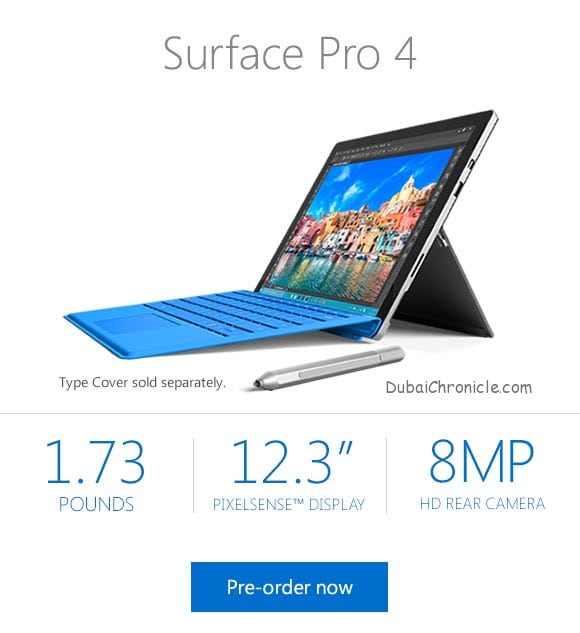 There is still a day to preorder the newest Microsoft Surface Pro 4 for $999 if you want to be amongst the first to receive it. We have got one for review already and we liked it very much! The functionality of the new device builds up on the proven success of the Surface Pro 3, still there is a substantial performance boost and a few more major improvements.

However, the tablet market competition has dramatically evolved since the launch of the Surface Pro 3. Now there is the Lenovo Miix 700 and the Vaio Canvas will ship soon. There is also the Surface Pro 4’s new family member: the Surface Book, a two-in-one boasting incredible battery life and a pricey external GPU option.

The Surface Pro 4’s impressive features, performance, and overall experience have set tough new standards for high-end Windows tablets. So, let’s see what makes this new tablet an outstanding one.

The really important difference you will notice with the Surface Pro 4 is on the inside: a sixth-generation Intel Skylake processor that kicks up 3D performance by as much as 81 percent.

Microsoft also re-engineered the Surface Pro 4 to distribute heat throughout the top portion of the rear panel, eliminating hot spots and allowing the optional Core i5 and Core i7 chips inside to run at full speed—something the SP3 couldn’t do.

The power button is on the top left, next to the volume rocker, like the Surface 3 and there’s the standard single USB 3.0 port, mini DisplayPort connector, and microSD card reader. The Surface Pro 4 integrates 802.11ac Wi-Fi, same as its predecessor, as well as Bluetooth 4.0.

The price tag is also different. The Core m-based Surface Pro 4 starts at $899. The SP4 Microsoft gave us to test carries an Intel Core i5 with 8GB of RAM and a 256GB SSD, a $1,299 tablet. You’ll pay up to $1,599 for the highest-end Core i7 version. Note that the Type Cover keyboard will cost an additional $130 even though we’d consider it an essential accessory. Microsoft hasn’t said anything about integrating the Surface Pro 4 with an LTE option, but we’d expect that to happen eventually.