The Golden Globes are one of the most talked-about award events of the year. The 2014 edition of the show was no exception. As always, the fashion trends on the red carpet were a topic as hot as the winners’ list. Now it is time to look back and make a quick fashion recap of the 71st Golden Globe Awards. 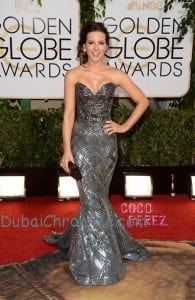 Kate Beckinsale rarely manages to disappoint when it comes to her red-carpet choices. At this year’s Golden Globes, the actress showed up in a shiny, metallic gown by J. Mendel. However, right before the start of the event, Beckinsale shared that she nearly experienced a wardrobe malfunction.

Her colleague, Naomi Watts made a big statement in her gold Tom Ford dress. Most impressive was the gown’s neckline, as well as its embellishment.
Helen Mirren took a risk by putting on a green Jenny Packham dress. Nevertheless, it was definitely worth it, since the actress easily stood out on the red carpet. In addition, the design of the gown was very flattering and creative.

Zooey Deschanel chose to appear in an Oscar de la Renta dress. Well, she did not look like a show-stopper. Despite that, it cannot be denied that she was great even though she kept things simple.

Taylor Swift seems to be subscribed to the best-dressed list. This year, she took the red carpet in a cherry red gown by Carolina Herrera. Her look was completed by a charming faux bob.
British actress Michelle Dockery may be a fashion icon on the rise. Downton Abbey’s Lady Mary shined in a gold gown by Oscar de la Renta. Although we are not so sure about the high-low design of the gown, Dockery was a nice addition to the regular Hollywood ensemble.

The 2014 Golden Globes worst dressed list is especially long and shocking this year. First, two of the industry’s most loved ladies, Sandra Bullock and Julia Roberts, were a complete disaster at the red carpet. Bullock wore a Prabal Gurung dress, which came in three different colours – baby blue, pink and black. This colour-blocking attempt made the Gravity star appear out-of-place. As for Julia Roberts, she looked as if she was headed to the office. Her Dolce & Gabbana black dress and long-sleeved shirt did not fit the red-carpet fashion.

Zoe Saldana often falls victim of fashion, especially at award shows. Just like Sandra Bullock, Saldana showed up in a Prabal Gurung gown. Similar to Bullock’s dress, the one on the Avatar’s actress was the opposite of chic simplicity.

Model Heidu Klum is also a regular in the worst-dressed section. Her 2014 Golden Globe gown choice was a little better this year. The dress really matched her figure. Nevertheless, the style reminded a lot of the 1990s and they are yet to make a fashion comeback.

Lena Dunhan’s fashion fails no longer come as a surprise. Like always, the actress went for a bright and unflattering gown. The difference was that the designer behind it was Zac Posen.
Kaley Cuoco overdid every aspect of the floral fashion trend. The newly-married actress wore a gown by Rani Zalhem that was not really meant for the red carpet.
Aubrey Plaza seems to love purple since she stormed the 71st Golden Globes in an all-purple look. Plaza wore an Oscar de la Renta dress that did not impress with much glamour or style.
Hottest Golden Globe Fashion Trends

There were not many fashion trends at the 2014 Golden Globe Awards. Many of the stars at the event were bold enough to go for individuality. However, there were a few tendencies that stood out on the event’s red carpet.

The bob hairstyle was one of the hottest of them. A big part of the ladies at the 2014 Golden Globes showed up with freshly cut hair. Therefore, shoulder-length bobs may become really huge this year. Among the stars that rocked a bob were Michele Dockery, Naomi Watts, Reese Witherspood and Hayden Panettiere.

The next huge fashion trend was red dresses. Even though celebrities like to stay away from this colour at red carpet events, this time, many of them surprised with crimson gowns. Amy Adams, Taylor Swift, Emma Watson and Lupita Nyong were just a few of them.

Among the less apparent trends at the 2014 Golden Globes were red lips (often seen in combination with red gowns) and statement earrings.