Financial systems across the world are stagnating, leading to challenges for a global economic recovery, according to the fifth edition of the World Economic Forum’s Financial Development Report 2012 released today.

There have been improvements in the banking system, such as Tier 1 capital ratios and non-performing loans to total loans, this signifies only a small step forward in what has been a sluggish recovery.

The Report also shows that liquidity appears to be stabilizing in a number of top economies, as highlighted by the fact that turnover velocity rebounded in 2011, moving closer to 2006 levels. However, such gains are offset by considerably weaker domestic market capitalization levels across the world’s stock exchanges. 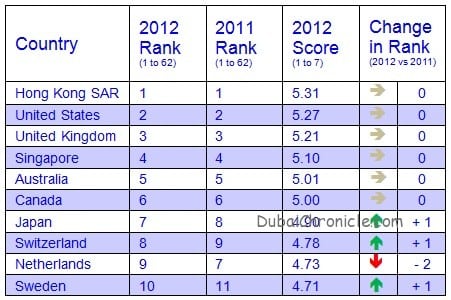 Topping the Index, Hong Kong SAR came in 1st for a second consecutive year as a result of benefits from a large and efficient banking system, well-developed infrastructure and robust equity markets. Despite these strengths, Hong Kong has a relatively underdeveloped bond market and its financial sector has yet to be fully liberalized.

The United States and the United Kingdom also remain in the same positions as last year, 2nd and 3rd, respectively. Both countries have highly developed financial markets, particularly their foreign exchange and derivatives markets, but they struggle with relatively inefficient banking systems. Banking system stability and currency stability are also areas of weakness. The US, however, has more developed equity and bond markets, while the United Kingdom has stronger corporate governance and legal and regulatory mechanisms. Japan and Switzerland each moved up one spot to 7th and 8th space overall. Both countries have improved the size and efficiency of their banking and financial services and have shown improvements in their legal and regulatory framework.

The general stability of the Index is further highlighted by Singapore, Australia and Canada maintaining their positions at 4th, 5th and 6th place, respectively. The Netherlands fell two spots from 7th to 9th because of weakness in equity market development and banking system efficiency. Sweden jumped into this year’s top 10 because of an improvement in retail access to capital.