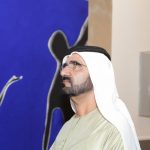 UAE Vice President, Prime Minister and Ruler of Dubai His Highness Sheikh Mohammed bin Rashid Al Maktoum has stressed the importance of continuing developmental work during the upcoming period to ensure that Dubai remains firmly on the path of excellence.

Sheikh Mohammed expressed his strong optimism that performance levels and high-quality productivity would meet his expectations following the global financial crisis, during a meeting at Al Bahr Palace last week.

His Highness’ comments came during a meeting with heads of local government departments and second and third tier officials representing various government agencies.

In further remarks Sheikh Mohammed gave reassurances that Dubai had recovered from the impact of the global economic downturn, before adding that government officials should assume full responsibility for propagating the process of modernisation and development while rendering first-class services.

Sheikh Mohammed said that many government agencies performed beyond expectations in countering the effects of the financial crisis, whereas others failed to meet expectations. However, Sheikh Mohammed added that rather than focusing on mistakes in the past, government officials should look to the future and work towards the next stage of development.

Sheikh Mohammed remarked, â€œWe are not in the process of holding departments accountable, what’s done is done. We require all to work towards the future and draft developmental policies to be implemented immediately, so as to preserve Dubai’s position, achievements and reputation.”

Sheikh Mohammed went on to express his confidence in the country’s youth to meet all challenges in attaining excellence and success.

He said that the past period required a financial regulatory system to oversee government departments, but that such a system would not put severe restraints on department officials, nor would it be an obstacle for future development.

“We must look forward and find ways to work freely without hindrance,” he affirmed.

Sheikh Mohammed called on officials to increase their efforts and work with more intensity to facilitate business for local, regional and international companies . He instructed that officials should provide incentives to help attract more foreign investment and capital.

He declared, “Past experiences have proved Dubai’s merit as a hub for business and finance with the necessary infrastructure to attract investors from the UAE and abroad.”

Sheikh Mohammed concluded by calling on government departments to increase their efforts rather than rest on their laurels. He said that work is the only benchmark to measure the progress of societies and that government officials are capable of meeting all challenges through innovation and the generation of new ideas.