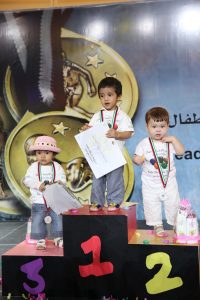 Toddlers, children, and their parents are all set to star in a week of fun contests as the Kids Olympic Games begins on Sunday, July 25 at Mirdif City Centre â€“ a member of MAF Properties that is a key sponsor of Dubai Summer Surprises 2010. Featuring toddlers as young as eight months and children up to twelve years, the competition is a signature event of Dubai Summer Surprises.

Into its eight consecutive year, Kids Olympic Games is the only such event for children to participate in exciting games and win spectacular prizes. Spread across two locations of Mirdif City Centre, the event features three arenas in the Central Galleria and four additional zones at Playnation.

Additionally, zone 3 at the Central Galleria will host a table tennis contest. Open to children between the ages of eight and twelve, participants have to compete against themselves to achieve the maximum number of wall bounces in a minute.