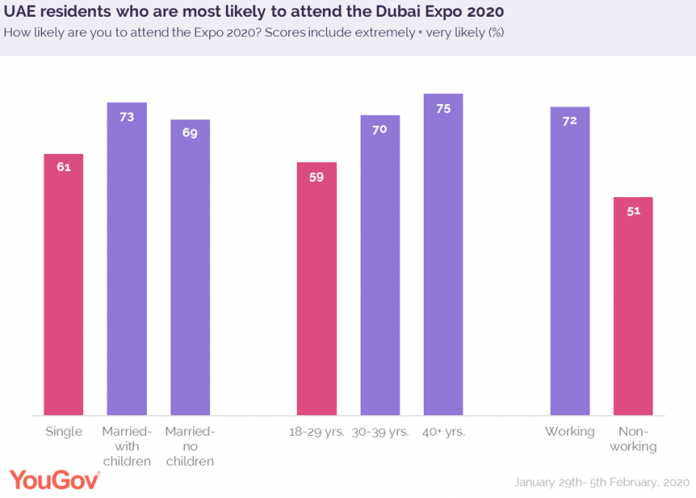 As Dubai is set to welcome visitors from across the globe at the Dubai Expo 2020 later this year, YouGov’s new survey reveals that excitement levels within the country are high with a large majority of UAE residents (67%) looking forward to attend the exposition.

Among those who are visiting the event, more than half (52%) are planning to attend the Expo at its launch while one in seven (15%) are likely to be present for the closing ceremony. Two in five (40%) will attend specific events. One in ten (10%) will join the celebration only after going through attendee reviews and a similar proportion are unsure of their attendance at this moment.

In the past, World Expos have given us some iconic structures and inventions such as the Eiffel Tower, the Seattle Space Needle, the television and even Heinz Tomato Ketchup. Therefore, it is not surprising to see that most UAE residents (52%) are eager to experience innovation at the expo. Following that, many are excited to witness the spectacle of culture and education (38% each) at the pavilions. A higher number of men than women are interested in exploring innovation at the expo (55% vs 45%) while more women than men are interested in the cultural aspect of the expo (46% vs 34%).

A considerable number of men are looking forward to the sporting events at the expo (35%) while a large number of women are keen to experience architecture (41%) and music (33%) at the event.

Most people are likely to visit the expo on short frequency tickets. Three in ten (29%) prefer the one-day ticket, just over a quarter (26%) are planning to buy the three-day multiple entry ticket and one in five (21%) prefer the monthly pass.  Only one in ten (9%) expressed an interest to buy the entire 6-month pass.

When it comes to the benefits of the Dubai Expo, more than half (55%) of UAE residents said it will boost the UAE and Dubai’s economy. Almost as many feel it will attract prospective investments (51%) and will increase the influx of tourists in the country (50%). 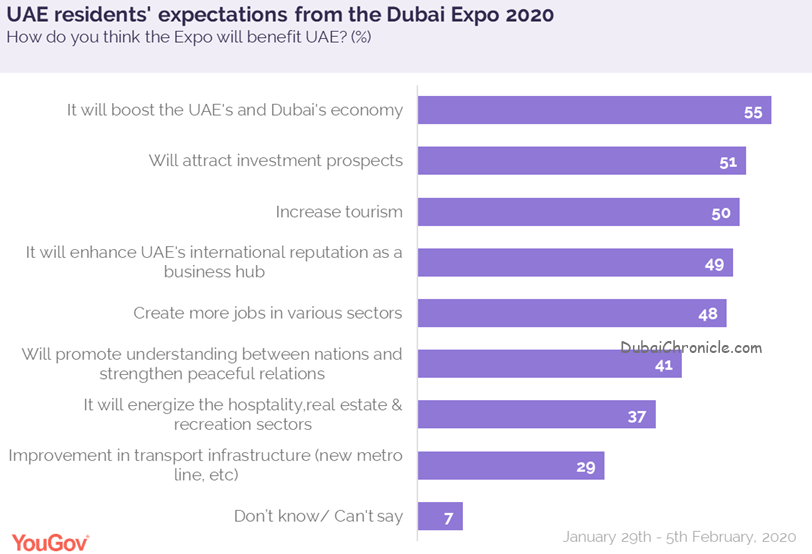 Many even think the Dubai Expo will enhance the UAE’s reputation as a business hub (49%) and will lead to the creation of more jobs (48%). For all these areas, women seem more optimistic than men.

Similarly, compared to other age groups, people who are 40+ seem to be confident about the expo and are most likely to say it will deliver all the above mentioned positive outcomes.

Amongst the nationality groups, Arab expats (47%) are most hopeful that the Dubai Expo will energise the hospitality, real estate and recreation sector.

While the lead up to expo is filled is anticipation and optimism, the survey revealed that there is low awareness around expo’s legacy. When asked about District 2020, only 28% knew what it was. 36% did not know about it and another 36% had only heard of it but were not completely sure what it was.

Data collected online by YouGov Omnibus among 1004 respondents in the UAE between 29th January and 5th February 2020 using YouGov’s panel of over 6 million people worldwide. Data is representative of the adult online population in the country