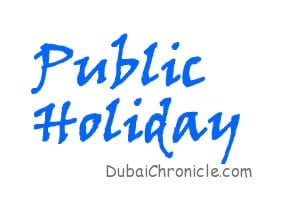 The official New Year holiday for the UAE’s Federal Ministries and their related entities has been announced as 1st January and 31st December, 2018, with official duty to resume on Tuesday, 2nd January.

The announcement was made today, Tuesday, in a circular issued by the Federal Authority for Government Human Resources, FAHR.