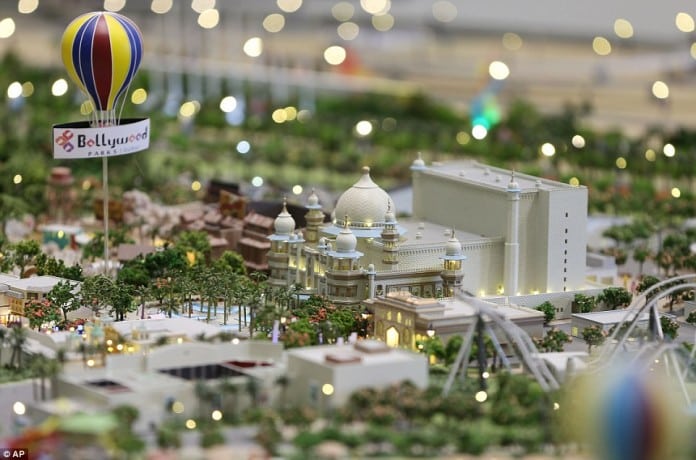 Admission is complimentary for anyone holding a daily pass or annual pass for Bollywood Parks™ Dubai, MOTIONGATE™ Dubai or LEGOLAND® Dubai. Bear in mind, tickets for the theme parks are much more expensive than anywhere else in the world. Do not expect a Global Village-like entry fee of 15 Dirhams.

Dubai Parks and Resorts’ own resident mixmaster at Bollywood Parks Dubai, DJ Jay, will provide live music throughout the night, while performers from throughout the destination, including MOTIONGATE™ Dubai and LEGOLAND™ Dubai, will get the crowd moving with intricate, high-energy choreography. Everyone young and old will have a chance to meet their favorite characters including Bollywood action heroes, MOTIONGATE™ Dubai characters including The Smurfs and even characters from LEGOLAND® Dubai. In addition, all Bollywood Parks™ Dubai rides, attractions, restaurants and shops will remain open until 2 a.m.

The end of the night will feature a countdown in front of the Rajmahal followed by spectacular fireworks at midnight to welcome in the new year.

Dubai Parks and Resorts comprises three theme parks: Bollywood Parks™ Dubai – a first-of-its-kind theme park showcasing rides and attraction based on some of Bollywood’s biggest blockbusters; MOTIONGATE™ Dubai – a unique theme park with rides and attractions showcasing some of Hollywood’s most beloved characters from DreamWorks Animation, Columbia Pictures and Lionsgate; and the region’s first LEGOLAND® Park and LEGOLAND® Water Park. The entire destination is connected by Riverland™ Dubai – a retail and dining destination at the heart of Dubai Parks and Resorts that is free for all to enjoy, and guests can stay at the Lapita™ Hotel, a Polynesian themed family hotel part of the Marriott Autograph® Collection. Expected to open in late 2019, Six Flags Dubai will be the destination’s fourth theme park and the region’s first Six Flags theme park.