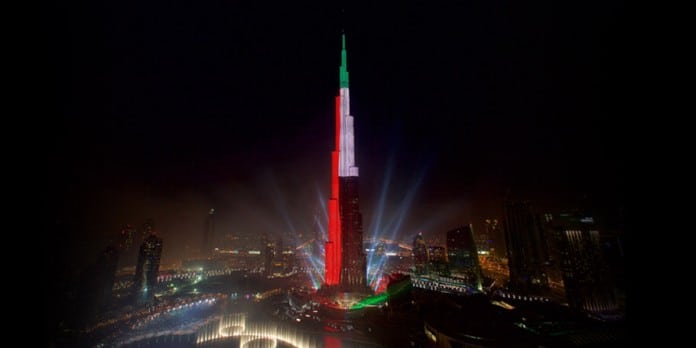 The world’s highest fireworks on Burj Khalifa, which has defined Dubai as the must-visit destination to usher in the New Year, will feature a magical eight-act display that presents the futuristic vision of the UAE.

Downtown Dubai New Year’s Eve Gala, one of the world’s most-watched New Year’s Eve spectacle, is welcoming 2016 with elaborate preparations to host the hundreds of thousands of visitors from all over the globe.

This New Year’s Eve celebration will be further defined by a fascinating LED display on the 828-metre (2,716.5 ft) high Burj Khalifa’s façade with some 357,000 LED nodes being lit up in myriad hues to highlight a number of themes including a tribute to the UAE.

Two minutes preceding the countdown, a gentle ballet of light will sweep through Downtown Dubai creating intricately designed patterns on the façade of The Dubai Mall. A visual depiction of a giant sand hourglass will mark the passage of time; the hourglass with 12 engravings start for each month of 2015.

The countdown and the majestic display to welcome 2016 will see a crescendo of fireworks, light beams and LED displays illuminating Downtown Dubai as one of the brightest spots on Earth.

The excitement does not cease as the display takes to the next level where Burj Khalifa assumes the form of a digital flower led by the multiple LED displays. What follows next is a rare symphony of colourful fireworks matched by graphic design on the tower’s façade that will make for a compelling visual treat.

The fireworks will also pay tribute to the futuristic vision of the UAE which leads to a befitting grand finale, as the UAE flag unfurls from the pinnacle of Burj Khalifa followed by digital screens that salute the nation and the GCC countries to celebrate the spirit of solidarity and brotherhood.

The event will be live-streamed for the fourth consecutive year on www.mydowntowndubai.com. Online visitors, anywhere in the world, can choose from three camera angles including a helicopter view of the spectacle. The event will be also broadcast live on the screens in Times Square, with the visuals of the crowds watching the gala from New York City to be shown on the huge screens set up in Downtown Dubai.

As part of the online experience, Twitter users who tweet using #DowntownHalo will be sent a personalised 360 panoramic animated image (GIF) of the Burj Khalifa fireworks after the stroke of midnight. A number of cameras have been positioned on the rooftops around Downtown Dubai to create this innovative digital firework experience.

Emaar is undertaking extensive preparations to start welcoming visitors to the gala. Several viewing points will be specially set up for their convenience. Working in partnership with the Dubai Police, Dubai Civil Defence and RTA, among others, vehicular traffic to the venue will be streamlined. Visitors are urged to take the Dubai Metro and conveniently access Downtown Dubai via the travellator that links it with the Burj Khalifa/The Dubai Mall Metro Station. The station is expected to be closed by 10pm. For further details, please visit www.mydowntowndubai.com.