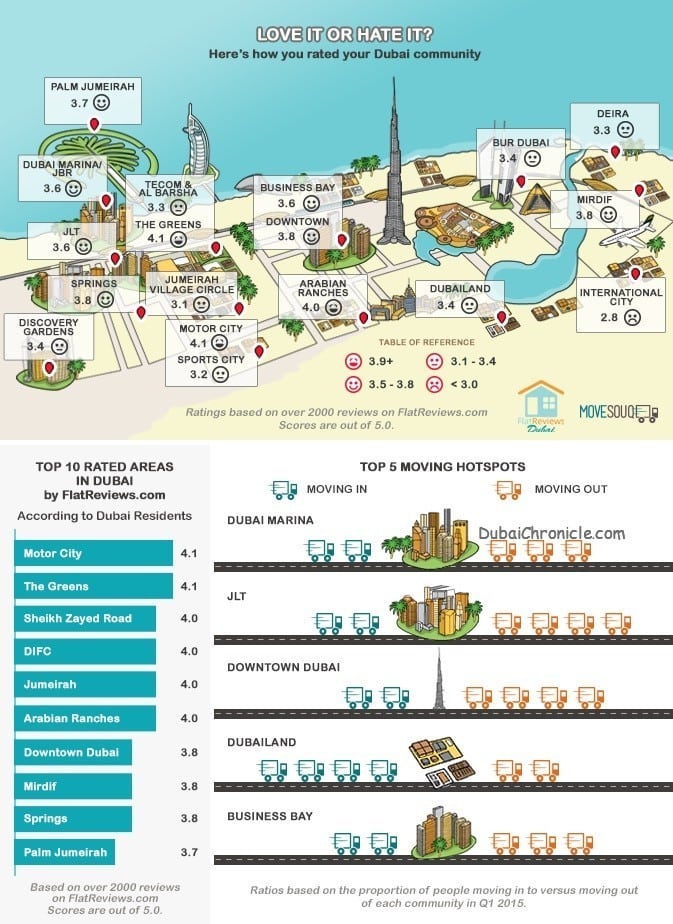 A new report indicates the most in-demand areas in Dubai based on moving activity and residents’ ratings. The results are based on over 2000 Dubai resident reviews on a property review site, and over 1000 moving requests made on a quote comparison site for home services in Q1 of 2015.

The report found that the highest rated communities in Dubai are Motor City, The Greens, Sheikh Zayed Road, DIFC, Jumeirah, and Arabian Ranches. Motor City and The Greens share first place with a score of 4.1 out of 5, while SZR, DIFC, Jumeirah and Arabian Ranches all earned an average overall score of 4 out of 5. The overall scores are based on categories such as traffic, access to nearby facilities (e.g. schools and shops), and value for money. Motor City earned its top spot because it ranked in the top 5 for traffic, pet-friendliness, walking possibilities, nearby schools/kindergartens and shops/restaurants, and value for money. The lowest rated community is International City with a score of 2.8.

The report also showed that the most demanded areas based on moving activity are Dubai Marina, Dubailand, Jumeirah Village Circle, Business Bay, and Downtown Dubai, which made up 31% of all moving in activity in the first 3 months of 2015. Dubai Marina has made the top of the list again this year, despite not making it into the Top Rated Communities in Dubai, which indicates that people will continue to live in communities such as Dubai Marina and Downtown Dubai for lifestyle reasons. However, the far-flung communities of Dubailand and Jumeirah Village are increasingly seeing more people move in this year likely due to lower rent prices.