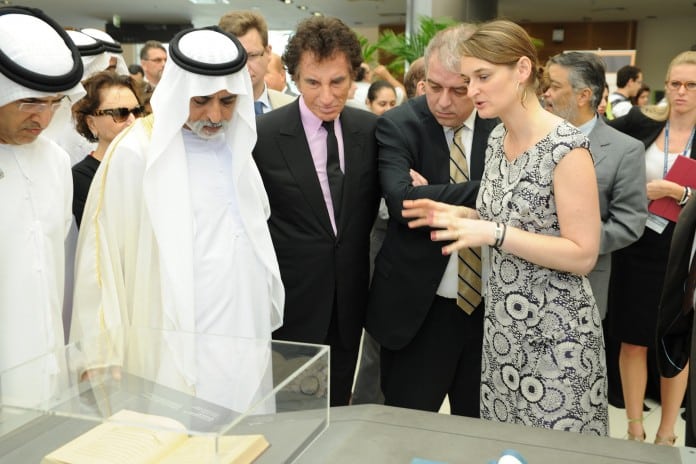 His Excellency Sheikh Nahyan bin Mubarak Al Nahyan, Minister of Culture, Youth and Social Development, opened The Golden Age of Arab Sciences exhibition in Paris – Sorbonne University Abu Dhabi in the presence of the former French Minister of Education, officials, experts, and other VIPs. The exhibition, which is organised for the first time in the UAE, will run from 24 September 2013 until 14 January 2014, and highlights the historical role of Arab and Muslim civilisation in the evolution of world civilisation and technology and the influence they have had on human advancement.

The Golden Age of the Arab civilization, from the beginning of the eighth century until the fifteenth century, saw the discovery and production of major scientific and intellectual feats. The exhibition brings the accomplishments of the Arab and Islamic world to the fore, giving the youth and the public a deeper understanding of their importance.

His Excellency Jack Lang, former French Minister of Education and President of the Institut du monde arabe, highlighted the importance of this exhibition in reminding us of a period of phenomenal prosperity during with the Arab world carried intellectual growth forward at an astronomical rate, stating: “We in Europe are fully aware of the importance of Arab and Muslim civilisation because we, at a certain point, built on and benefited immensely from the surge of thought and invention that this great culture produced during its golden age, bringing us into a period of Renaissance and growth in the arts and sciences. Today, in my role as Chairman of the Institut du monde arabe in Paris, call on us to continue to build bridges between our two regions, always remembering that human civilisation can only ever really advance through human interaction and co-learning.”

Commenting on the role of the Paris – Sorbonne University Abu Dhabi in organising this exhibition, HE Dr. Mugheer Khamis Al Khaili, Director General of Abu Dhabi Education Council (ADEC) and Vice President of Paris-Sorbonne University Abu Dhabi, said: “This exhibition will encourage younger generations in the UAE to innovate and contribute towards creating a better future, and ensuring that the UAE is prepared to take on a leadership role in

technology and the sciences, starting from the long history that Islamic civilisation had in innovation and the renaissance the world is experiencing globally at the moment, which goes hand in hand with Abu Dhabi Vision 2030 in creating a highly skilled workforce and building effective institutions responsible for realising this vision of becoming among the five most advanced governments in the world.”

He added: “When one of the most prestigious universities in Europe organises an exhibition of this scale, recalling the accomplishments of the Arab world during its golden age, it reenforces the substantial impact this civilisation has had on the world as a whole and also reflects the immense degree of respect that world has for this heritage of culture and human thought. I now renew my call to all our students and thinkers to acquaint themselves with the history of our people in the various fields of science and knowledge.”

Professor Eric Fouache, Chancellor of Paris – Sorbonne University Abu Dhabi, describes his university as the epitome of cultural exchange, with its vision as a “Bridging between civilizatios” being vividly represented by the 65 nationalities that interact, bringing Abu Dhabi to the world and the world to Abu Dhabi.

The Golden Age of Arab Sciences, covering the periods of the early eighth century up until the fifteenth century, is being exhibited by the university in an effort to enhance the depth of youth and masses’s understanding of the substantial contributions that Arab culture has embedded into the roots of scientific and cultural knowledge across the world. Exhibited in a format that is engaging and interactive, introducing its viewers to a narrative and a journey that avoids static conventional museum inspired displays, showcasing over two hundred pieces that help us better comprehend the vast impact Arabs and Muslims have had on the sciences.

The exhibit will be equipped with audio visual guides, short films, and digital screens that further elaborate the various elements of the history of the Arab golden age, alongside the curated artefacts and scripts by their different eras. There will also be several talks, schedules of which can be found on the website soon.

To make the experience more coherent and easier to navigate, the exhibit is divided into three parts: Sky and Earth, Humanity, and the Arts. The accompanying guides will also include studies that have benefited human culture and affected human thought.

Since its launch in Paris, France, and its later showing in Doha, Qatar, the exhibition has brought in a large number of viewers, succeeding in reminding us of the timeless and critical contributions from Arabs and Muslims through an objectively academic narrative of the historicity of accomplishment, from the Ancient Greek philosophers to the Roman cultures, after which the Arab Islamic evolutionary movements for seven centuries set the stage for the European Renaissance and the Ottoman expansion that would later bring about the Industrial Age and modernity as we know it.