Hollywood events like the Oscars are scorned by some for their focus on fashion, luxury and extravagance. However, sometimes the Academy Awards can be very inspiring. At this year’s Oscar Awards a number of stars showed that they are perfect examples not only of success on the big screen, but also off it. 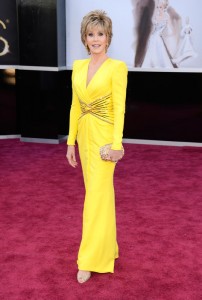 Jane Fonda is now 75 years old, according to the Wikipedia, but she still manages to look stunning every time she walks out on the red carpet. In fact, it seems that she even looks better with every year. At the 2013 Oscars, Fonda wore a stylish Versace gown in a bold yellow colour. The dress highlighted her magnificent slim and toned figure. In addition, she looked younger than some of the new-generation actresses who attended the awards. But how is that possible? The legendary actress shared that she follows a strict fitness and yoga routine. Fonda is known as a fitness expert. She has appeared in more than 20 exercise videos. That is amazing since the actress is suffering from arthritis which makes any physical activity a challenge. Moreover, in the last decade Mrs. Fonda had to undergo surgeries for hip and knee replacement and she managed to defeat breast cancer. It seems that Jane Fonda’s super strength can combat even the hardest health and age-related obstacles and keep her looking youthful and beautiful forever. 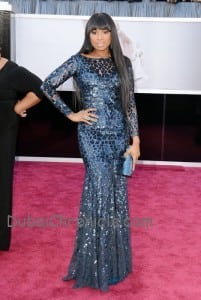 Back in 2007, Jennifer Hudson reached the highest peak of fame when she won an Oscar for her performance in Dream Girls. However, Hudson made a loud comeback last evening at the 85th Academy Awards gala. The star sang song “And I Am Telling You I Am Not Going” with which she stole the hearts of the Oscars attendees and viewers. But what was truly inspirational about Hudson was her impressive 36-kilograms weight loss. The actress showed off her new silhouette in a floor-length midnight blue dress which placed her among the best dressed ladies of the evening. Jennifer Hudson shared that she is maintaining her slim figure by lots of workouts, as well as portion control. In addition, the talented Dreamgirl stated that she is less proud of her Oscar win than with her weight loss success.

I love my Mom! 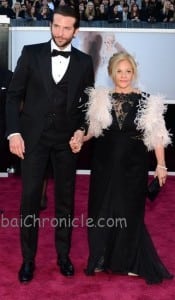 But not everything inspirational comes down to looks, designer gowns and sparkling jewelry. Some Hollywood names and nominees showcased their love for their family and particularly for their moms. Among them was Silver Linings Playbook actor and Oscar nominee Bradley Cooper. Instead of taking a sexy hot girlfriend, Cooper came hand in hand with his proud mother Gloria. Mom Cooper could pass for a real Hollywood star with her shiny and feathery black dress. However, the actor’s mother surprised everyone when she showed that she was wearing sneakers. Gloria justified her choice of footwear with her fear of tripping on the red carpet. Sneakers or no sneakers, Bradley Cooper was happy to take his mom to the Oscars.

The Silver Linings Playbook star was not the only one who came with his mother. Many celebrities were accompanied by their parents. Among them was Charlize Theron who took her mother Gerda Maritz. The two look-a-likes each tried to stand out. Theron wore a gorgeous white gown, while her mom rocked a simplistic black dress. Chris Evens’ Oscar date was also his mom Lisa and, of course 9-year old Beast of the Southern Wild star Quvenzhane Wallis had mother Qulyndreia right by her side at her first big Hollywood event.

Recently, a growing number of young people choose to be accompanied by their mothers on the red carpets, including Michael Phelps.