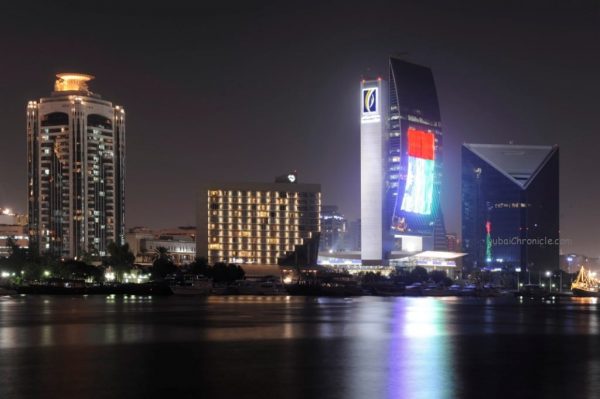 Emirates NBD, a leading bank in the region, announced today that it is celebrating the 40th UAE National Day by integrating the “Spirit of the Union” theme across a range of activities, designed to highlight the political and social unity and cultural heritage of the country.

With the UAE National Flag as the main focus of the celebrations, a 45 x 25 metre illuminated flag weighing a staggering 2.5 tons has been installed on the façade of the Emirates NBD Group Head Office along the Deira Creek. The dazzling display, which consists of 12,500 linear metres of waterproof LED lights in the four colours of the UAE flag. Simultaneously, LED lighting and laser sky beams in the colours of the UAE flag have been projected on many of the bank’s prominent branches across the length and breadth of the country.

“On the occasion of the 40th UAE National Day, Emirates NBD congratulates the President His Highness Sheikh Khalifa bin Zayed Al Nahyan, His Highness Sheikh Mohammed bin Rashid Al Maktoum, Vice-President and Prime Minister of the UAE and Ruler of Dubai; and their Highnesses the Supreme Council members and Rulers of emirates, as well as the citizens and residents of the UAE.”

“On this glorious occasion, Emirates NBD is proud to celebrate our nation’s spirit of unity and stability, and the strength of its multi-cultural heritage,” added Al Mansoori “In honouring the UAE National flag, Emirates NBD is also paying tribute to the various qualities it represents – peace, honesty, hardiness, bravery, power, courage, hope, joy, love, optimism as well as determination and the defeat of enemies,”

The UAE National Day celebrations at Emirates NBD also consist of a range of activities focusing on the cultural heritage of the country, including a unique art competition being organised jointly with Tashkeel. Entitled ‘My UAE,’ the competition is themed around reflections on how the UAE is perceived by those who live in the country. The winners of the competition will be announced on November 30th, 2011, at an internal event at the Emirates NBD Headquarters in Deira, Dubai.

Under the theme of ‘Taste of culture,’ the bank has also organised traditional Emirati experiences for their staff, including cultural tents providing local coffee, henna painting and traditional Emirati dishes for walk-in guests. Cultural activities such as UAE National dances and flash mob performances have also been organised at several branches as well as at Dubai Mall.
In its continuing theme of unity and national pride, a “Best Dressed Branch and Department” competition has been organised for staff members. As part of the competition, the staff members decorated their respective branches and departments with national colour themes and flags. In addition, traditional Emirati dishes were served to customers and guests. Rick Pudner, CEO, Emirates NBD, along with members of the senior management joined the celebrations and interacted with employees.

As part of the National Day celebrations, the bank also placed bridge banners with digital countdown displays on Abu Dhabi Airport Road and Sheikh Zayed Road. A message is to be revealed on December 2nd, wishing the public “Happy 40th National Day.”