During the past few years, the media content and licensing industry had witnessed tremendous success on both national and international levels. The cartoon character industry has become a competitive industry that attracts companies and businesses from all over the world in a pursuit of investing and developing the characters and then turns them into a trade mark product.

Although the licensing business was introduced to the Middle East Market in the early eighties, it is now playing a major role in the Middle East and North Africa markets and step by step some new companies started to raise the awareness about copyright laws and the potential for licensed merchandise in the region.

The simple definition of licensing is; allowing others to use your product image on their production line while you keep control of the copyright; it is a way to generate new revenue streams. In the local market, some local brands are being licensed for the service of other governmental and commercial sectors through providing characters’ licenses to producers such as companies, factories, governmental entities, products and more. Activities undertaken by the licensees span across a wide spectrum and include Apparel, Accessories, Food and Beverage, Stationary, School & Paper Goods, Footwear, Health and personal care. 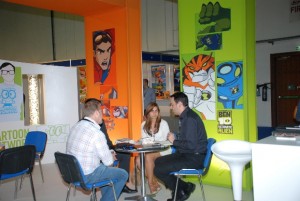 Licensing is a global and huge industry with revenues worth billions of dollars. Media, TV production and TV Programs have a big share from this big sum. And as global brands are expanding their presence in the Middle East, Media Tycoons are not excluded. A good example is Turner Broadcasting System, Inc. (TBS, Inc.), a Time Warner company which delivers some of the world’s most successful and well-known news and entertainment brands such as CNN, Cartoon Network, Cartoon Network Too, Boomerang, Cartoonito, TCM (Turner Classic Movies), and Adult Swim. The company now broadcasts 21 entertainment channels in 17 languages across approximately 100 countries in Europe, Africa and the Middle East.

The achievements of TBS’ brands and licensing activities are not just restricted to what is shown on air but also expands into toy driven brands such as Zoobles and TechDeck; from which the company has been working with SpinMaster to achieve stand alone successes.

TBS Arabia (Turner Broadcasting Systems Arabia), a division of Turner Broadcasting System – TBS also revealed the launch of a brand new Cartoon Network animation development studio in Abu Dhabi; Cartoon Network Studios Arabia. The vision behind this project is to support local talents from across the Middle East to develop new productions and take the finished product across the whole region and to a possible global audience.

“This is a key event in our calendar and allows us to showcase the best of Cartoon Network’s globally successful brands. Cartoon Network Arabic will be celebrating its one year anniversary this October and its success has been from the strength of great content and phenomenal brands such as Ben 10, Adventure Time, Generator Rex and Smurfs, and of course due to the support from our business partners, affiliates, suppliers and retailers that we have been able work with.”

“This September also sees the launch of Cartoonito, our pre school block which will be aired on Cartoon Network Arabic, which has allowed us to highlight great pre school brands including Bananas in Pyjama’s and Jelly Jamm and see these added to our key franchise and licensing offerings.” said Alan Musa, Vice President and General Manager, Pan Middle East and Africa. 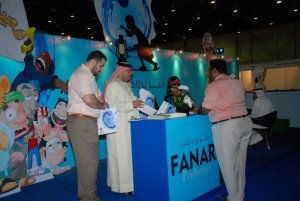 Fanar Production is an Emarati company that was established in 2008, with a dream to create and deliver both compelling and high quality entertainment through computer-generated animation (CG). Appealing to both regional and global audiences, the company is committed to developing its own IPs (Intellectual property) and marketing them across multiple revenue platforms including Video, Television, Cinema, Mobile Content, Gaming, and Licensing & Merchandising.

Commenting on the licensing business in the UAE, Mr. Abdulla Al Falasi, business development manager at Fanar Production said: “We find it really important and necessary for our product to access the retail market especially after the huge success that our animation program (Shaabiat Al Cartoon) had achieved during the past few years.”

“Normally, a seven and a half hours animation series requires 8 months of hard work, a big budget and lots of manpower to be produced, and this is what most of the people do not know.” Said Al Falasi

“All TV producers seize the opportunity during Ramadan to release their latest drama, animations and productions. Therefore, we work hard during the whole year to come up with unique ideas that suit the viewer’s tastes. We are very proud to announce that this year, Abu Dhabi TV had adopted one of our new productions called (Eshhafan) which is an old series production that is reproduced after 40 years as an animation series. Continued Al Falasi

SPACETOON started broadcasting in the Middle East in the year 2000 as the first animation TV channel to broadcast to the Arab World. The unique concept had saved the channel a special place among other channels that delivers the same content. SPACETOON channel mixes entertainment with education, in a way that targets the growth of culture and cleverness of the Arab kids.

SPACETOON broadcast content from the East and West, although the company buys more content from Japan, and in no time, the channel has a massive numbers of viewers that are attached to the Arabized Japanese series such as; “Adnan & Lina”, “Conan” and “Hamtaro”. SPACETOON has also introduced the famous Japanese “MANGA” which is a well known globally, like “Dragon Ball”, Naroto”.

Japanese characters gained publicity similar to the western content in Action planet programs like “Batman” and “Superman” which has a high prevalence in the Arab world countries with more than 130 million viewers, the animation became adhered with SPACETOON brand name.

Mr. Fayez Al-Sabbagh, Chairman of Global New Age Media said that “Our field needs some motivation therefore, we are happy that Dubai, and the United Arab Emirates are hosting a very prestigious event dedicated for this particular market. The importance of The Dubai International Character and Licensing Fair and MYCONTENT 2011 is that they are the sole events in the region that introduces the interested parties in the newest characters that its content is being broadcasted in local TV channels, and it also introduces the owners of these properties, thus the decision makers of the licensing industry meet each other in this event.”

“SPACETOON International and SpaceToon Media Hub “SMH” an affiliate of ST International in Malaysia will attend the event to screen its first live action movie “Mantera” which is produced as per Hollywood standards, it is a co-production movie by ST Russia, ST Dubai and SMH, its shooting took place in Moscow, Dubai and Malaysia.” Continued Mr. Fayez

In 2010, the (RGH) and Turner Broadcasting signed a strategic partnership in order to improve development, production, broadcasting and merchandising initiatives. Headlining the new partnership was an agreement to broadcast the company’s Ben & Izzy and Tareq wa Shireen animated series on Cartoon Network in the Middle East and North Africa (MENA) starting from October 2010, followed by future airings in additional regions including Europe, Asia and North America.

Rubicon Group Holding has been a constant exhibitor and a key player at the Dubai International Character and Licensing Fair (Character Dubai). Mr. Ghassan Ayoubi, the Executive Director said “Like every year, Rubicon looks forward to being part of the Middle East’s largest character and licensing fair. This event plays a major role in building partnerships and celebrating our brand’s success. We highly appreciate Index’s continued support and initiative in organizing this exhibition and are certain that like every year, Character Dubai will be a great success.”

In the themed entertainment arena, (RGH) recently earned its largest commission to date, “The Red Sea Astrarium”, a 184-acre themed entertainment resort celebrating the heritage of the region’s past civilizations, as well as its future, with a featured Star Trek attraction. Opening in spring 2014, the $1 Billion project will serve as a model for “green energy,” incorporating state-of-the-art renewable technologies throughout the facility.

Today, businesses have the opportunity to meet these global and local brands in Dubai through the Dubai International Character & Licensing Fair (Character Dubai) which was launched in 2008 by Index Conferences and Exhibitions Organisation Est. – member of INDEX Holding.

Character Dubai is highly considered one of the pioneer business events held in Dubai, and one of its kind in the MENA region. The great success that was achieved through the past few years is a clear indicator to the success of this industry, while character Dubai is keen to stimulate the licensing industry and the property rights of cartoon characters in the Middle East markets. Character Dubai also highlights the role of the promising markets, which has all the potential to become one of the largest markets dedicated for international licensing in the future. Character Dubai is keen to create a market in the region which is dedicated to the international licensing of the future.

Character Dubai was instrumental in initiating the character and licensing industry in the Middle East and this unique event runs in parallel with the Dubai World Game Expo and MYCONTENT. The three events had received the full support and patronage of H.H. Sheikh Majid Bin Mohammed Bin Rashid Al Maktoum Chairman of the Dubai Culture and Arts Authority from the beginning. This year the event will be held at the Dubai International Convention and Exhibition Centre from November 30th till December 3rd. The three events attract broadcasters, TV and film distributors, major studios, content producers, government officials, advertising and brand agencies, financial institutes, Apps developers, telecoms, retailers, licensees, licensing agents, distributors and manufacturers from the MENA region.