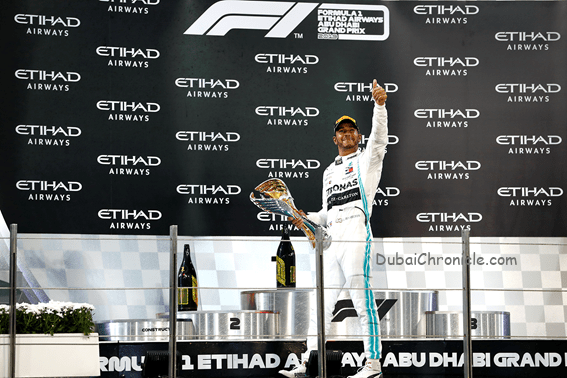 In a thrilling race that saw the Red Bull of Max Verstappen start beside him on the front row and Mercedes team mate Bottas at the back of the grid, Hamilton battled hard for the win, keeping the pack at bay in the closing laps as the sun set on Yas Marina Circuit, the 11th edition of the Abu Dhabi Grand Prix and the 2019 season.

During the five-day Abu Dhabi Grand Prix race festival weekend that saw the F2 season end on a high for Sette Camara and Luca Ghiotto and the F4UAE Trophy Round provide plenty of high points for UAE racing sisters Amna and Hamda Al Qubaisi, the F1® 2019 season finale saw Mercedes yet again finish on top going into the winter break – their sixth victory in 11 years at the Circuit.

Waving to his army of fans around the world from the top step of the podium, Hamilton was in great spirits as he closed the 2019 calendar in Abu Dhabi on a high note.

Al Tareq Al Ameri, CEO of Yas Marina Circuit, said: “Once again, our congratulations to Lewis on winning this race – this win marks a fantastic end to his championship season. I would also like to offer my thanks to all the teams and drivers for supporting us during our 11th edition Abu Dhabi Grand Prix weekend and providing us with such a superb weekend.

“We have seen a wonderful four days of entertainment all over Yas Marina Circuit – from the excitement of the F1®, F2 and F4UAE series to the varied activities and entertainment in our F1® Fanzone and Oasis areas, but it’s not over yet! We have our 48th UAE National Day celebrations taking place tomorrow with something to enjoy for everyone.

“The Abu Dhabi Grand Prix continues to innovate and our second decade of operation has seen us introduce new elements and entertainment including the first Grand Prix Auction with RM Sotheby’s and the F1 Food Fest. We thank everyone for their continued support and look forward to welcoming our guests from around the world back next year.”

In addition to the support F2 and F4UAE Series getting proceedings of to an exciting start on Sunday, off-track a range of activities in the Circuit’s F1® Fanzone and four Oasis areas kept race goers of all ages entertained with driver autograph sessions, race simulations, aerial acrobatics displays, live music performances, UAE cultural displays, and much more.

At exactly 5:10pm it was time for the main event, the three-way F1® showdown between Max Verstappen, Charles Leclerc, and Lewis Hamilton.

With the setting sun providing the perfect starting backdrop, the 55-lap Abu Dhabi Grand Prix ended under the illumination provided by the Circuit’s iconic floodlights and with Lewis Hamilton jumping for joy at a Circuit he has won at three times before.

Fans watched the action live from Yas Marina Circuit’s multiple grandstands and from fans’ favourite Abu Dhabi Hill, while millions of others around the world followed live updates and a wealth of multimedia content on the Circuit’s online channels.

The evening finished with a show-stopping performance at the du Arena as US rockers The Killers entertained the crowds with Sunday night’s Yasalam After-Race Concert. Their high-energy performance wrapped up an A-List line-up of After-Race concerts throughout race weekend that included DJ Marshmello on Thursday, followed by hip hop artists Future and Gucci Mane on Friday, and US singer Lana Del Rey on Saturday.