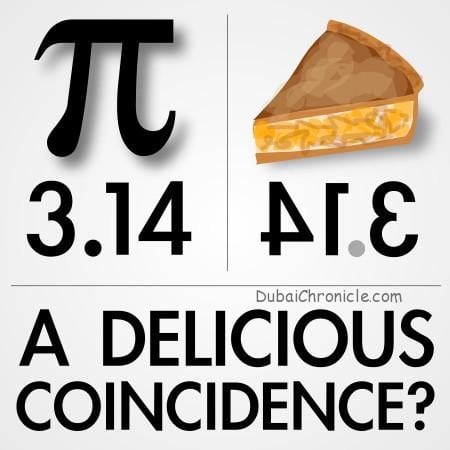 Celebrated in countries that follow the month/day (m/dd) date format, because the digits in the date, March 14 or 3/14, are the first three digits of π (3.14), Pi Day was founded by Physicist Larry Shaw back in 1988.

pi is represented by the lower case Greek letter, π, because it is the first letter of the Greek work περίμετρος, meaning perimeter.

One of the oldest and the most recognizable mathematical constant in the world, Pi (π) is the ratio of any circle’s circumference to its diameter. Its value is approximately equal to 3.14159265. It is an irrational number, which means it cannot be expressed as a ratio of whole numbers, and its decimal representation never ends or repeats.

In recent years, mathematicians have called for replacing pi by tau (τ) as a way to describe the relationship between a circle’s circumference and its radius. In order to spread the word about the advantages of tau over pi, mathematicians around the world celebrate Tau Day on June 28.

The Gregorian Calendar is full of dates that when written in a special manner represent a mathematical or scientific concept. Some of these include: Yellow Pig Day, Mole Day, Fibonacci Day, Palindrome Day and e-Day. Use our Date Pattern Calculator to find out other interesting calendar dates during the year.

Everyone should be able to enjoy a fun mathematical holiday and there are many other days during the year when one can honor pi. Some of these are:

Pi is a homophone of pie – the 2 words are pronounced similarly, but are spelled differently and mean different things. So, naturally, you can celebrate Pi Day by having lots and lots of pie.

A pie baking contest could be a good idea and participants should bake pi shaped pies. It can be also combined it with a pie eating competition.

You can also run a pi recitation contest. Anyone who can recite the most digits of the constant gets to take home a pie.

Geeky? Wear a t-shirt that has the numbers of pi on it or sport some pi shaped accessories. Earrings perhaps?

Foods that start with a pi, like pineapples and pizza or foods that are circular in shape like pancakes and cookies are also in demand mathematicians during pi days.