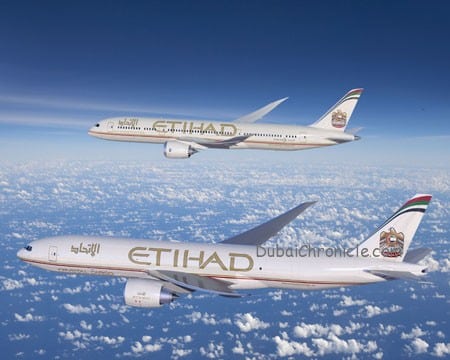 Flying from Abu Dhabi to the United States on Etihad Airlines is now like a domestic flight from New York to Los Angeles. Connecting immediately to Etihad’s new US airline partner JetBlue can be fast, no additional customs or immigration clearing will delay for this transfer.

Clearing US customs and immigration in the UAE is not a hoax, but reality.

The government of the United Arab Emirates paying 85% of the bill, so the US government can do their job in processing travelers in Abu Dhabi instead of New York or other US gateways seems to be a bargain, but some US congressman thinks it’s an embarrassment.

It means 85% of the salaries of US officials protecting the US homeland in Abu Dhabi are actually paid by the UAE government.

To make it even better, this is a clear advantage for anyone to fly on Etihad compared to flying on a US carrier- thanks to the joint effort of the US and UAE governments.

The project has drawn criticism from U.S. pilots and members of Congress.

In exchange, travelers may be lured to fly from Abu Dhabi direct to the United States on Etihad Airways, the UAE’s national carrier and sole airline flying non-stop between the two locations. The facility does not process cargo.

The U.S. has preclearance passenger facilities throughout Canada, in four Caribbean locations and Ireland. The new facility in Abu Dhabi, which allows passengers to complete U.S. customs and immigration before boarding flights to the United States, is the Middle East’s first. It is also the first pre-inspection arrangement to be enacted with another country since the 1980s.

Etihad plans additional flights to the U.S. will be processed via the facility in the coming days. The state-backed airline currently operates non-stop daily flights from Abu Dhabi to New York, Washington D.C. and Chicago. It plans more routes this year to Los Angeles and Dallas.

The airline has codeshare partnerships with JetBlue Airways and American Airlines that allow passengers to fly on routes operated by both carriers on a single ticket.

The Air Line Pilots Association said on its website that it opposes the Abu Dhabi facility because only Etihad benefits from the agreement. Long customs lines at airports are already hurting U.S. airlines and passengers from Asia or Europe could opt to fly Etihad over U.S. carriers to avoid those lines, it added.